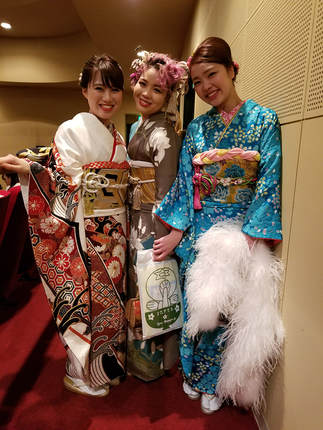 shrinking the distance to the japanese countryside

Hello everyone, I am back again with another article at the end of the year and it’s time to look back to 2018. But first of all, I would like to thank you all people who have accessed this site in greater and greater numbers, who have been writing in with questions, and who have decided to visit Tajimi and discover what is here and in the surrounding Gifu Prefecture.

More and more people travelling to Japan realise that there is more to see and do than what you can find in the crowded tourist traps. They want to get off the beaten path, but there is a lack of information on what you can actually experience. Well, Tajimi is a great place to start that adventure on the Japanese countryside, and by now we have enough information here to be able to claim to be one of the best English sources of travel information in all of Japan, in particular when it comes to pottery and pottery experiences, but also covering things related to that, such as food and drink. You drink tea from a chawan (tea bowl), pour your sake from a tokkuri (sake flask) into an ochokko (sake cup). You put your food in bowls and on plates. All of this is made from ceramics. So in the coming year, we hope to expand our scope to all these activities and places where pottery is used.

You can also look forward to more visual experiences through a wealth of 360 VR photography. I have even been taking people on immersive tours around Tajimi lately, as VR users are increasing in numbers thanks to great new and affordable headsets, such as the Oculus Go, and free, fun and easy to use social VR apps such as vTime. Both are strongly recommended, because they allow us to put Japan in your living room!
The Tajimi ceremony hall filled with happy 20-year old young adults
​But on to the visual parade in this article.

I wanted to begin with the three pretty girls at the top of this article, who dressed up for the Coming of Age celebrations in Tajimi on January 7. Coming of Age Day (成人の日 Seijin no Hi) which is held annually on the second Monday of January. It is a celebration of all those who have reached or will reach the age of majority between April 2 of the previous year and April 1 of the current year. It was a chilly day when I dove into the crowds of kimono-clad girls and guy with my 360 camera, and I got this great shot inside the hall where they had gathered to listen to speeches and enjoy performances.

Next up we have a photo from the little town where we live outside Tajimi, called Onada. Living in a Japanese countryside town is a very special experience indeed. You become a member of the local community and there are commitments involved in this, such as participating in the cleaning of the roadside or the local Shinto shrine. There are also parties and fun, and this is a shot I took on April 1 as I joined a small group of villagers in a little temple dedicated to Kūkai (空海), also known posthumously as Kōbō-Daishi (弘法大師 The Grand Master Who Propagated the Buddhist Teaching), who lived 774–835, was a Japanese Buddhist monk, but also a kind of polyglot genius with talents reminiscent of those of Leonardo da Vinci's. You can tell we are having fun, can’t you? This is a lovely aspect of religion in Japan - people have a very light-hearted, down-to-earth approach to things spiritual, and there is nothing strange at all to gather for a little drinking party in a temple like this. It was a wonderful day and the sakura (cherry blossoms) were in full bloom around us.

Next is a 360 shot from the Curry and pottery party in Tajimi on April 7. While some people may think pottery is for old folks, our city is brimming with young creators aspiring to a career in pottery. This party was full of them. Japan is facing an age of the shrinking population and less and less young people while the top of the age pyramid swells. Like every other city around the country, Tajimi is looking for a solution. I hope to make a contribution by connecting the city to the world through VR in various shapes and forms, not only photography but also through the increasingly popular social VR platforms. Wouldn’t it be wonderful to be able to join a party like this from anywhere in the world, just be putting on your headset? A big part of the problem of the age pyramid in Japan, in my view, is that Japan is not open to the world. In particular, young people with a vision and talent should be able to meet easily irrespective of where they are. They should be able to communicate and create together. Tajimi has many young and talented creators, we have a fantastic infrastructure for ceramics, educational institutions, tradition and history, but also artists looking to the future. Next year I hope to connect them to your reality in VR. 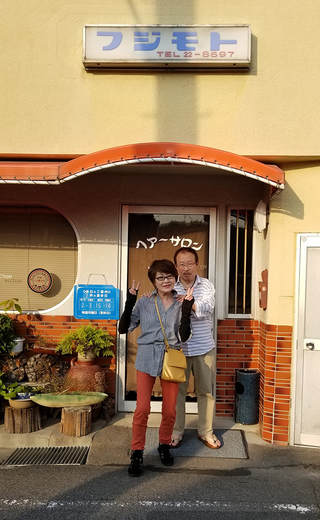 Next, I have another picture from Onada, and it is a very simple one. You see a married couple here who happened to be outside their barber shop as I was walking past with my 360 camera. Fumi-chan (front) and Riko (back) are a great pair that helps us in so many ways, invites us to home parties and introduce people who are helpful. The barbershop has been a meeting spot for people all the way from the days of the samurai. The people of Edo (the old name for Tokyo) used the barbershops of the day as a hub for gossip and news. There is, in fact, a great novel from the early 1900s by Shikitei Samba set in a barbershop. Bathhouses served a similar purpose, and he covered that in another book. Fumi-chan and Rikio know just about everything going on in our neighbourhood, as everyone comes for a haircut on a regular basis and share the latest news in the process. This is a world that has largely vanished from the big cities and should be on your list for exploring the countryside of Japan.

I end by a video I shot of Anna-Maria Wiljanen, a Finnish Art Historian who visited the great Eihoji Temple in Tajimi on November 16. I wanted to show you all a great point about travelling in the Japanese countryside, which is a lack of people, or, to be more precise, a lack of tourists. Anna-Maria was surprised to find this fantastic temple but no crowds. We basically had this oasis all to ourselves this evening in November. Be sure to turn off the captions if they are not displayed on the screen (from the little cc button down to the right).

Enjoy the rest of 2018, or whatever year you discover this article. And welcome to Tajimi!

Please click here for inquiries on how to explore Tajimi and Gifu off the beaten path.
Ask about travel to Tajimi