04 - A historic walk in tajimi - north of Toki river

​“Tajimi, the capital of pottery culture, has developed together with Mino ware. Here you find historic kilns, old streets, solemn ancient temples and monasteries, places of interest and historic sites that stand quietly in the midst of nature.” This is how the city’s official website introduces our town. Many of the buildings and roads in the city are long gone, but today we will trace times past in a walk north of Toki river. 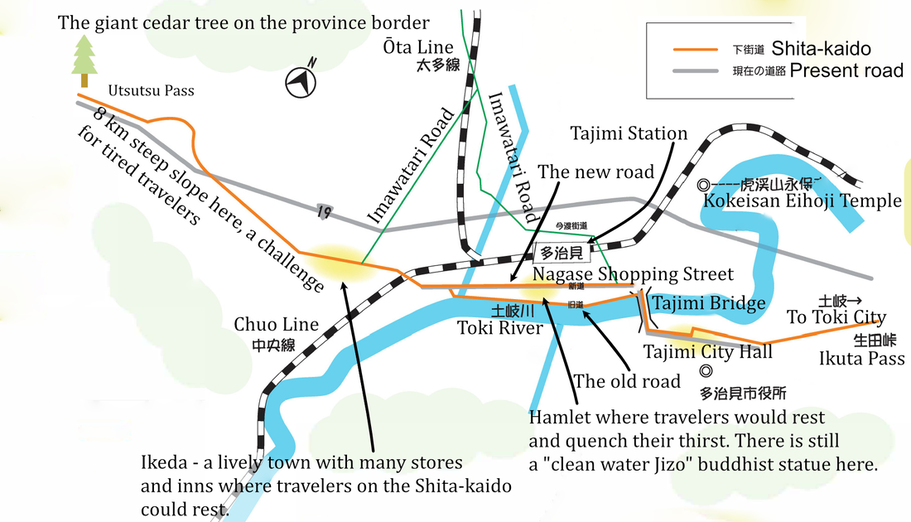 We have made a clickable map to help you orient yourself during this historic walk. We use shops and other landmarks (purple markers) that are easy to find along your way. To see the legend, click the icon in the top left.
​

Roads and travellers in tajimi and the mino region

Tajimi’s historic development is intrinsically connected to pottery. Mino ware is the name of the pottery that developed in the valley where Tajimi is located, historically known as the Mino Province. To transport the wares produced from the precious clay deposits in the surrounding mountains, roads played a vital part. Japan had developed a nationwide network of roads and highways in the 7th century to carry things on foot, horseback, and wheeled traffic; it was also used for transporting goods between towns and villages.
​
The five major roads, called kaido, started from the capital (originally called Heiankyo, today known as Kyoto). North of Tajimi ran the Nakasendo Highway, connecting Kyoto and Edo (today known as Tokyo) from the early years of the Edo period (1603 - 1867). A sideroad, Imawatari Road, ran down to Tajimi. Today we will walk a short stretch of the “Lower Road” - Shita Kaido - running from a junction with Nakasendo in the east through Tajimi down to Nagoya on the Pacific coast. We will also pass the local Kokei Road.
​
We start our walk from the South exit of Tajimi station. Take note of the nice park - the Tajimi Station South Square - in front of the station building. There is a connection between the water there and the Kokei Road that we will explore later.
​
Travellers and transporters have passed through this region since ancient times. You can tell this by the presence of stone effigies by the road sides of the Batō​ Kannon (horse-headed Kannon), with its crown of horses on its head, a widely worshipped guardian deity protecting travelers along the roads. What did they look like back in Edo era times (1603 - 1867)? Famed woodblock artist Hiroshige made a long series of designs picturing the Nakasendo Highway in the early 1800s, that accurately illustrates transporters, pilgrims, samurai and other travelers of the day.
​ 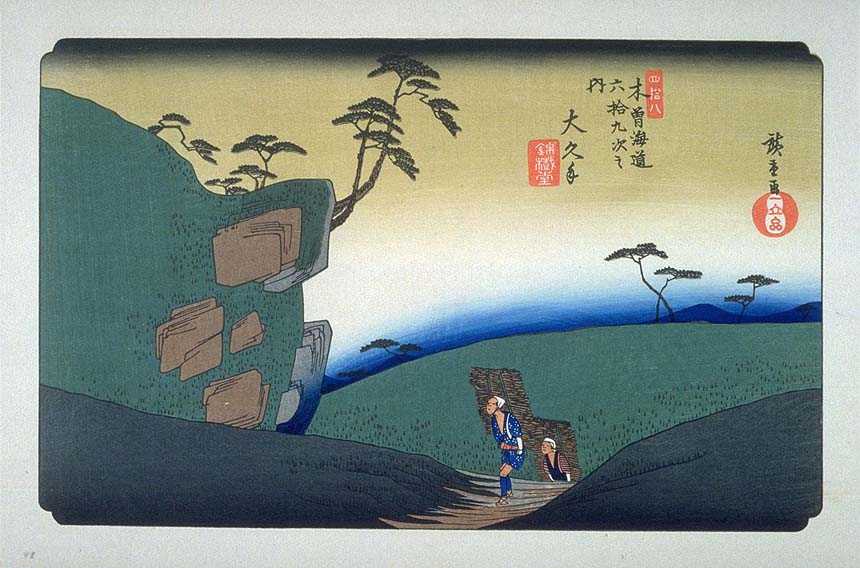 This woodprint by Utagawa Hiroshige gives us an idea of what ordinary transporters looked like in the Edo era. Here Hiroshige depicts two men who appear to carry firewood near Ōkute-juku inn on the Nakasendo highway in Mizunami, a neighboring town to Tajimi. Public domain, via Wikimedia Commons.
In the old days travellers passing through Tajimi from Nagoya on the Shita-kaido (footnote 1) would first pass Ikeda-cho in western Tajimi, a bustling town with many innkeepers and shops as a post station on the lower highway. The Shito-kaido was a side road that branched off from the major highway Nakasendo further to the East, running towards Edo (Tokyo). In ancient times they would walk along the Toki River, but our route turns before we reach the river bank. You will turn to the left at the Tamanoya shop and enter the Nagase Street named after a hamlet in the area. This newer road was built in 1887 to replace the old Shita-kaido road on the river bank.

nagase street - the hub on our road map

Our walk jumps back and forth in time - Nagase Street is the newest of all the roads here. Before the opening of the Chuo train line between Nagoya and Tajimi in 1900, the main means of transport was by land using horses, wagons and carts. When the Chuo Line opened to Tajimi in 1900, Nagase Honmachi Dori (Nagase Street) flourished as a route to the station. By the 1920s, many transporters trafficked the road. The number of shops selling daily necessities, fresh food and entertainment facilities such as cultural theatres gradually increased. Another important road was the Imawatari-kaido. Even after trains became the main means of transporting Mino ware, the main industrial produce in Tajimi, it was an important road for transporting daily commodities and firewood for kilns from neighboring Kani and Hime in the north down to Tajimi.
​
Our first stop on this historic walk, however, is on a backalley. As you walk down Nagase Street you will pass the Wani bookstore and cafe on your right hand side after a few minutes. You need to turn to the left immediately after that and walk up the narrow alley to find the spot on the right hand side. It is small area with some trees - which are thought to have had some religious significance in ancient times. There is also a Batō Kannon, the horse-headed Kannon I mentioned earlier. This sacred place (map) is the Dainichi Nyorai (Vairocana) Shasō - Shasō refers to a forest that surrounds a shrine building or shrine precinct. 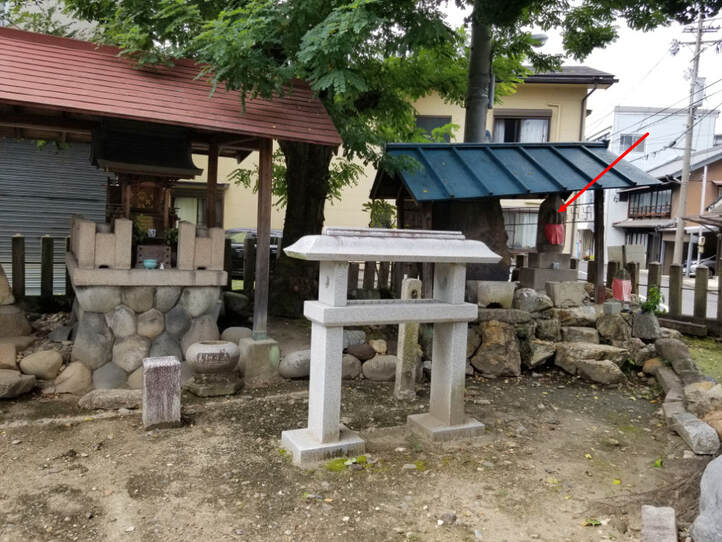 The Dainichi Nyorai Shasō near Nagase Street. The Bato Kannon (marked with a red arrow) statues had inscriptions made by people who used horses in the transport industry, some of which were directions, and some even mentioned “horse racing parties”.
Next we walk back the same way to Nagase Street and turn to the left to continue to continue along the Nagase Street. After a few minutes we arrive at a five-way junction (photo below).  You can’t miss it. Turn to look back at the corner of the triangular shaped building and you will see the colourful mosaic that serves as our landmark here. On your right you'll see a road with a stone signpost inscribed with the word 虎渓道 ("Kokeidou" or “Kokei Road”). This is where our story connects back to the water in the park, for people channeled water from the Kokei mountain down to the hamlets in the Tajimi valley, which suffered from a lack of water for farming. Gravity helped them - in other words - to irrigate their farmland.
​ 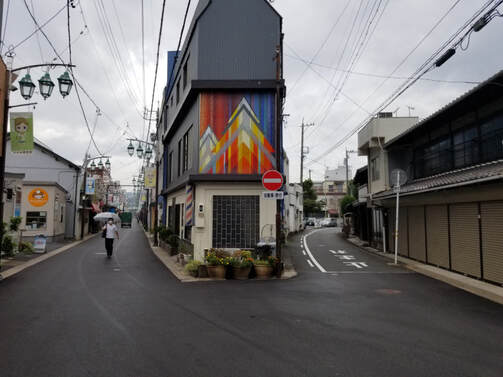 The road to the right hand side is the starting point for the old Imawatari Road.
To the left of the Kokei Road is the starting point for the old Imawatari-kaido, which connected Tajimi with Nochiminato (now Imawatari, Kani City) on the banks of the Kiso River. In the past, ceramics produced in the Tajimi area and tribute rice from the villages - a tax paid to the samurai lords - were carried on the backs of horses along the Imawatari Kaido to Noichiminato, where they were transported by boat down the Kiso River.
​ 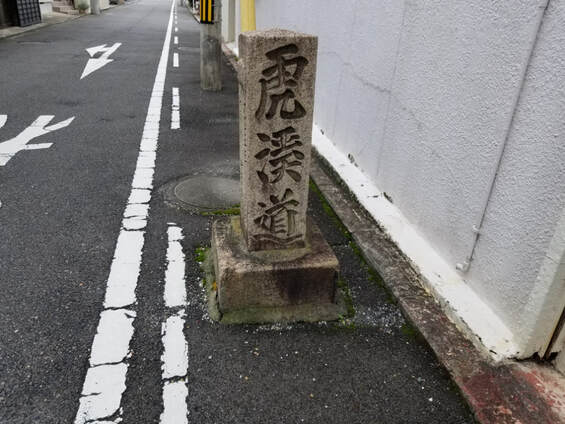 On your left hand side you will find this road sign that says "Kokei Road". The road leads up to the Kokei mountain overlooking the valley.
We continue walking towards the end of Nagase Street, passing a bag shop to the right. On the left hand side is an old building. Look up - a roof god is enshrined there. Yanegami or Yaneigami-sama (ja: 屋根神様) is a Shinto deity enshrined on the roof of a house. They are found in Aichi and Gifu Prefectures. Next door you will find the Showa-era style Tamaki Liquor Shop. Step in to experience a bit of a time slip, maybe buy a bottle of the local Michizakari sake! And don't miss the nice old beer posters high up under the ceiling. 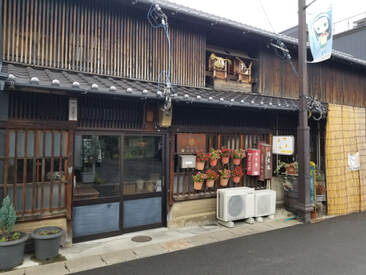 Continue to the end of the street and turn to the right, you will face the Tajimi Bridge. In olden times, before 1887 when the new Nagase Street was built, here you would find an earthen bridge that was frequently washed away when the Toki river flooded. People would then have to cross by boat. The Shita-kaido Highway ran on the river bank so it was flooded too, which is why Nagase Street eventually replaced it. It’s a very nice walk by the river, so we turn to the right and stroll back. Maybe you can imagine the travelers of olden times, and those times go far back indeed. According to legend, Yamatotakeru no Mikoto (ja: 日本武尊), a famed warrior during the reign of Japan’s 12th legendary Emperor Keikō (景行天皇, Keikō-tennō, 71–130 AD) passed this way on his way back from the eastern conquest of Japan.
​​ 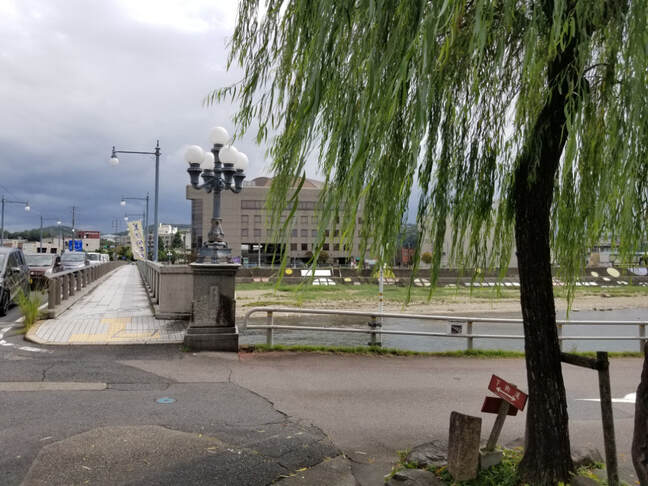 Tajimi Bridge straight ahead and to the right the road and the river bank where the old Shita-kaido once ran.
The Toki River, with its shallow bed and swift current, did not allow for water transport, so the road developed as an overland route. To protect the inns along the Nakasendo further to the north, luggage and public officials were required to take that route, and the Shita-kaido was forbidden. As a result, Shita-kaido - the “Lower Road” that you are walking now - was treated as a back road and there were no official inns. However, because the Nakasendo and Kami-kaido “Higher Road”) routes required a journey of 30 kilometers (19 miles) through the mountains, whereas the Shita-kaido route was only 24 kilometers (15 miles) along a mostly flat road by the river, many goods were transported on the Shita-kaido despite the prohibition. ​
​ 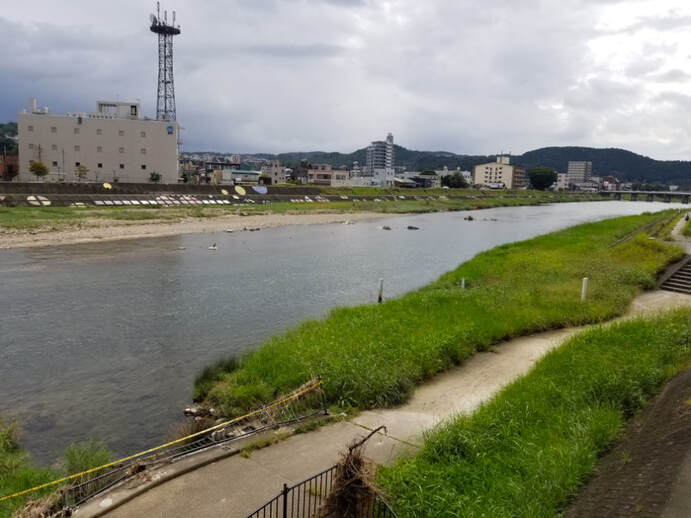 Gone are the days when people from near and far trafficked the old Shita-kaido road along the Toki river, but you can still walk on the riverbank. Maybe the images of Hiroshige's travellers join you in your imagination.
The inn owners along the Nakasendo often filed complaints about the traffic on Shita-kaido, which was not supposed to be used by government officials. It seems like they were worried about losing business to inns along Shita-kaido.

​​There were no restrictions on ordinary travellers who were not public figures, and the route was called Zenkoji-michi or Ise-michi because many travellers used it to visit Mitake or Zenkoji from Nagoya and Ise from Kiso. After the Meiji era (1868-1912), the Nakasendo became irrelevant and people and goods travelling between Nagoya and Shinshu came to use the lower highway exclusively. It’s role was then taken over by the Tokaidō​ Main Line, which today carries travelers on the super fast Shinkansen bullet trains on the Tokaidō route east of Gifu between Nagoya and Tokyo.

1. Native speakers unfamiliar with the place name tend to read the name of the "Lower Road" - 下街道 - as Shimo-kaido. The kanji for "under" or "lower" is 下 and can be read both ways. However, the correct pronunciation is Shita-kaido. [scroll back to where you were reading]