In part one of our walking course series we took you from the Hakusan Shrine in Onada to the hills of Takata, a village famous for its tokkuri sake flasks. We discovered remnants of the once thriving ceramics industry in the village. This time we continue on the road towards the neighboring city of Kani, to explore a pleasant relaxation area and a sacred waterfall.

You can go to the starting point by catching a bus from Tajimi Station. Here is a bus map. Take the orange line (Onada line 小名田線) (starting from the North Exit side of Tajimi Station) and get off at Onada-cho 1 (小名田町1). Walk past the convenience store and the bakery on your left. Keep walking straight.

How to use the map below:

We have marked six points of interest in the order we saw them on our walk. You can click each number to bring up a picture. If you click the icon in the top left, you can bring out a dashboard showing all points in order. You can also display a line showing directions from Tajimi station to the starting point. Use your mouse wheel or fingers to enlarge the scale.
This route is quite simple and you can combine it with a visit to the Hakusan Shrine, for example, as described in our previous article.

(1) We have included a stop at the Kusanokashiragama kiln, where the famous potter Sokei Aoyama lives and works. We covered the experimental archeologist's work in a series of articles, among them a couple of pieces on the Shiro tenmoku, or white tenmoku, one of the few forms of pottery unique to Japan. Master Aoyama's research and reengineering of the production method of the bowls has resulted in the recognition that these white tea bowls were produced here in Onada. If you are interested you may visit the Kusanokashiragama gallery at the kiln by appointment.
​
(2) Near Master Aoyama's kiln you will find the Sakura Gohei cabin, that serves charcoal grilled Gohei Mochi, a snack peculiar to this region. We have documented how to cook this rice snack as well as its history with two articles. One of these snacks is quite enough for lunch and will keep you going until supper. If you want to charge your batteries before you walk up in the hills on the rest of this route this little cabin is a good place to do so, or you may come back here when you return.

Let us begin from the end with our final destination - and the main attraction of this course - is a waterfall devoted to the Fudou-sama god. This is a fearsome deity known as the "Violent Wrathful One" and in India and "Violent One of Great Wrath" in countries like Nepal and Tibet. In Japan he is known as the "Immovable Wisdom King" (Fudō Myōō 不動明王).
​

Fudō is one of the especially important and well-known divinities in Japanese Buddhism, being especially venerated in the Shingon, Tendai, Zen, and Nichiren sects, as well as in Shugendō. In India Fudō evolved into a powerful demon-subduing deity, which explains his fearsome looks. Perhaps it also explains the story of his presence at this sacred waterfall. It is said that a Yamabushi ("Mountain Samurai") visited Onada many centuries ago. Yamabushi (山伏) literally means one who prostrates himself on the mountain". These people are Japanese mountain ascetic hermits, and were considered to posess supernatural powers.

At the time of the Yamabushi's visit to Onada, there was a villager who suffered from a terrible eye disease. The Yamabushi healed him using water from the waterfall, and the miracle was attributed to the powers of the Fudō. Since then, people have been visiting the place to pay respect to the god and perhaps to gain some protection thanks to his powers. 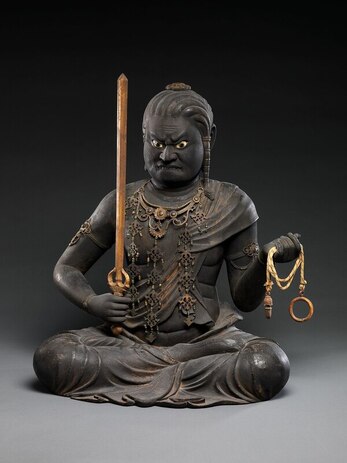 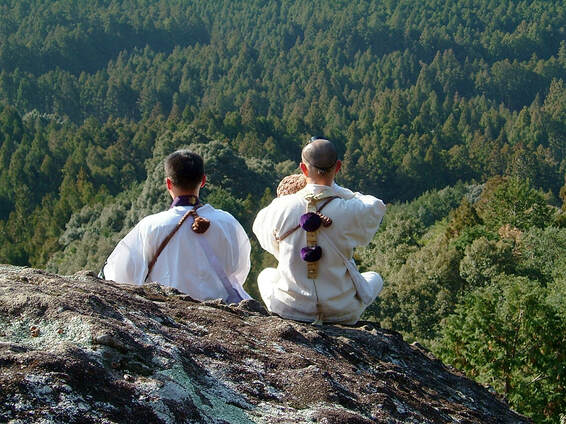 The road from the main street ends at this pleasant area where you can enjoy food and drink.
(3) To reach the waterfall you will walk from Sakura Gohei up the slope on road 381 along a long curve and continue until there is a road on your right hand side that will take you up to the mountain. It's about a ten minute walk from the main road up to a resting area, a very pleasant place lush with greenery. There are restaurants and cafés and you can enjoy your food and drink in the very pleasant garden. Perhaps this is something you want to consider for your journey back, so let us continue to the entrance to the path up to the waterfall.
(4) At the very end of the road, beyond the resting area, you will find the entrance to the path that will take you up to the waterfall. 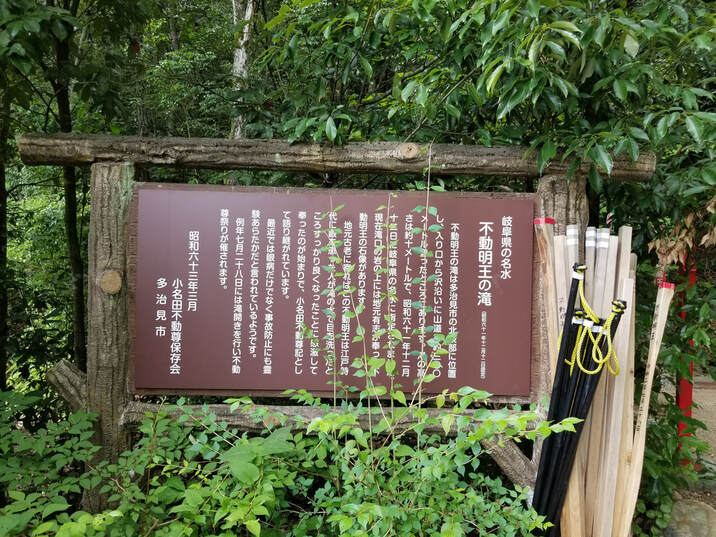 The sign that greets you at the entrance says that the path up to the top is three hundred meters long and runs along a creek. Locals made stone statues of the Fudo deity and placed it on top of a rock at the top of the waterfall (if you look hard in the video below you may see it). The sign mentions the story of the man in the Edo era who's eye was healed after he washed it in the water. He prayed in gratitude to the gods, and that was how people came to view the waterfall as sacred. People in our time also believe the place can bring you protection against accidents. Gifu Prefecture has, according to the sign, designated the water as meisui (名水). The term refers to springs, underground water, and rivers that have long been sources of particularly good quality. Meisui is often used for tea ceremonies, sake brewing, and rice cultivation because of its high quality. Oh, by the way, you may borrow one of the walking staffs for the climb ahead of you.
We begin the ascent towards the waterfall. Mind your step, the path is narrow and slippery.
A pole with an inscription informs us that there are five hundred steps left to the destination. The inscription beyond that greets us welcome.
(5) Finally we arrive at the waterfall. Once a year a Buddhist monk will come here to perform a prayer. Anybody may take part. Every year on July 28th, a waterfall opening ceremony is held and prayers held to the Fudo deity. The ceremony is held in the hut, where the monk recites sutras facing the waterfall. When we attended only a handful of people came, should you come you are guaranteed to be a sensation! To the left side there is also a Shinto shrine. It is very typical for Japan that these two different religions share places considered sacred. Can you see the stone image of the deity at the top?
​
(6) On your way back on the main road you will find this small altar with two jizou-san figures sitting on top. They are called the Iwagame Jizou-san. They are there to protect people from road accidents. Speaking of which, the statues sit on the left side of the road where there is no walking path. Be very careful if you cross to take a closer look.
​ 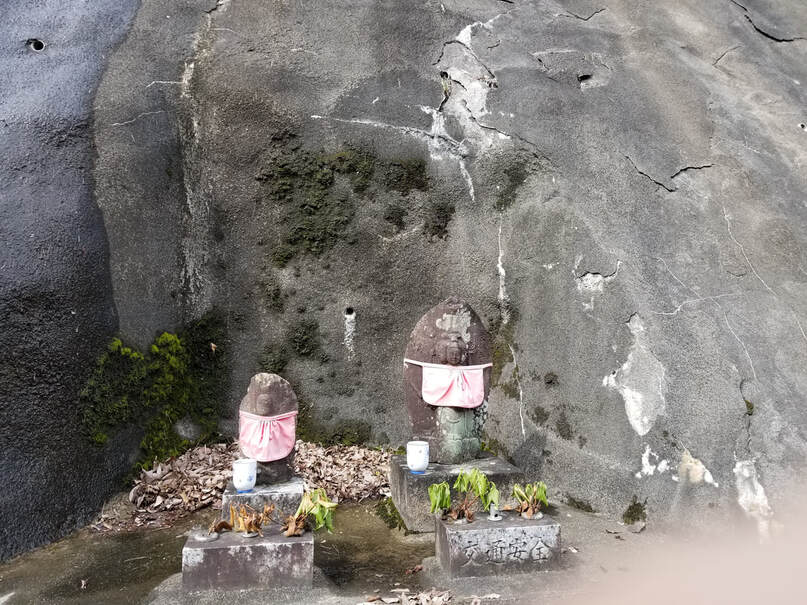 Well, that's it for this time. We hope you enjoyed the walk. In the next installment we will introduce some more hidden treasures in Onada.

images in this article

The image of the Fudō Myōō deity was donated by Creator:Kaikei to Wikimedia Commons as part of a project by the Metropolitan Museum of Art.
Image of Yamabushi: By 唐山健志郎 - 唐山健志郎, CC BY-SA 3.0, link here.​