Our goal for this walk - the site of an ancient kiln and shrine
Welcome to another walk in Tajimi!
​
Ichinokura village is a treat for the pottery enthusiast. Here you will find the Ichinokura Sakazuki Art Museum, where you can enjoy exhibitions of Kobei Katō​'s works, Mino ware as well as a collection Persian pottery, among other things. Just as in the first part of our Ichinokura walks, we start in front of the museum.

Getting off the bus

Your start- and/or end point 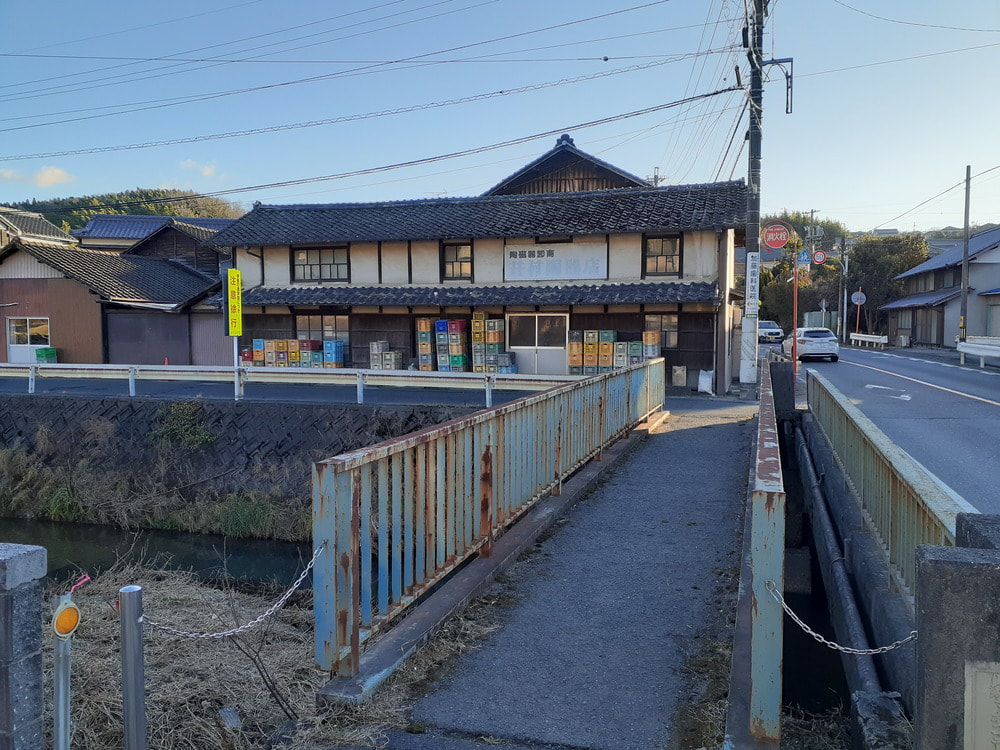 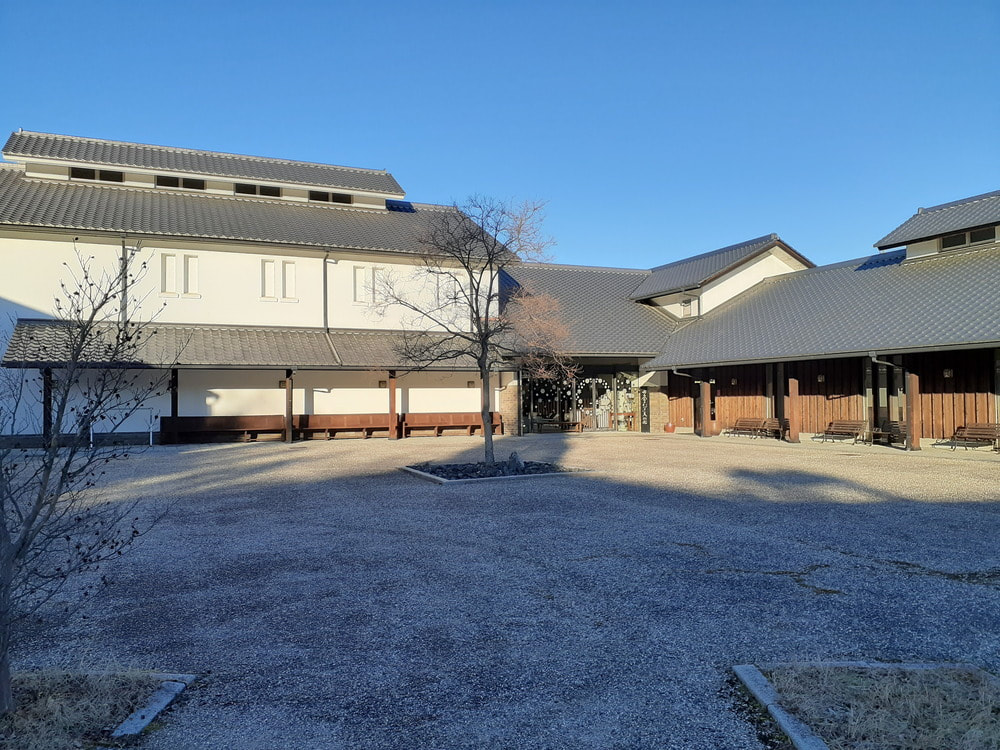 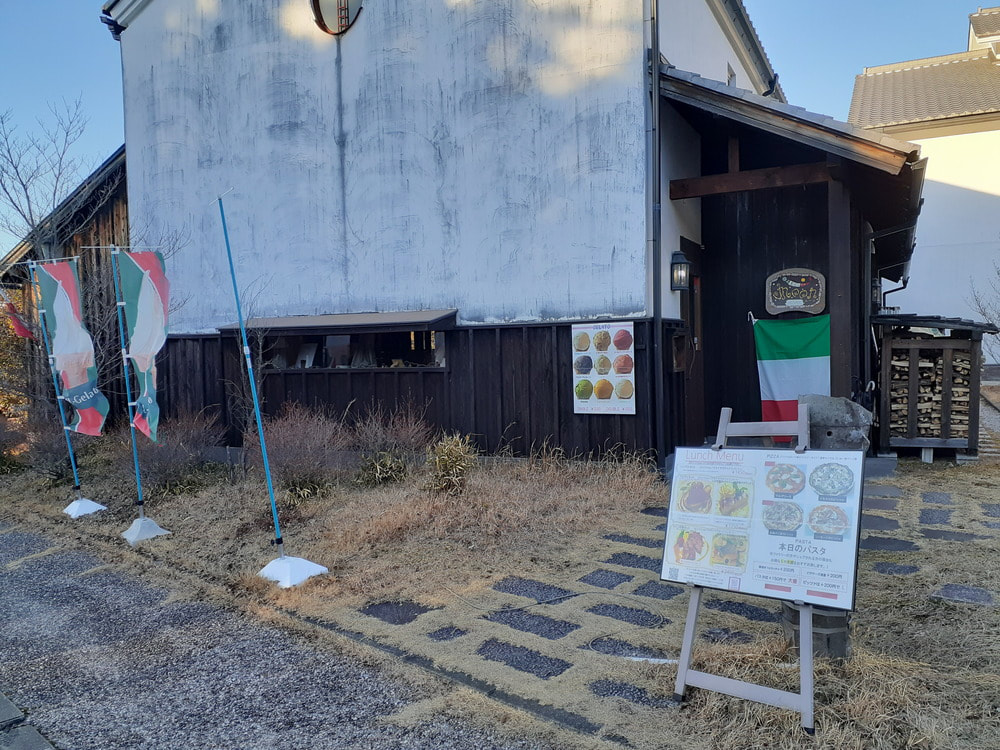 Walk from the bus stop across the river, turn to the left where you find the museum and this pizza restaurant.

Today we start from the old locomotive next to the Sakazuki Museum. In the heydays of Tajimi, ceramic goods produced by the thriving industry were originally transported on the Tono Line by steam engines. This engine was a post-war work horse, unique in the sense that is was powered by a bus engine. As we head towards the famous Kobei-gama Kiln we pass the Kobei-gama Ceramics Studio Sakuto-kan Workshop Hall where you can try making your own pottery.

The Kobei-gama kiln is one of the most famous in Tajimi city. In a separate article, we interview master potter Ryotaro Katō (44), who is full of energy and passion for ceramics. He spoke to us about Persian lusterware and its revival here at Kobei-gama. There is also a wonderful old pottery museum on the premises, where you can see fantastic old Persian pottery collected by Ryotaro's grandfather, Takuo Kato, for his pottery research.

360 view of the anagama kiln in autumn
Kobe-gama Pottery was founded in 1804 in Ichinokura town in Tajimi, by first-generation founder Katō Kobei in Mino-no-kuni, who dyed and supplied tableware to high-ranking customers, including the lords of the enormous Edo castle in present-day Tokyo. Takuo Kato, the sixth generation master at the Koubei Kinl, accomplished the important feat of bringing to Japan and restoring ancient pottery from Iran, where the Persian pottery culture already had ceased to exist.
A 360 view of a section of the lusterware museum in the Kobe kiln main building
The late Living National Treasure, Takuo Katō (1917–2005), who was the sixth-generation master ceramicist of the Kobei-Gama Pottery, was the man who first found interest in ancient Persian lusterware ceramics. It’s beautiful blue and three-colour glazes inspired him to revive the techniques of the Persian potters that had been completely lost after the 17th century.
​While Takuo Katō contributed greatly to the revival of Persian ceramics, Ryotaro now looks to revitalise Minoware.

“Famous samurai lords like Oda Nobunaga, Toyotomi Hideyoshi, and Tokugawa Ieyasu, as well as tea masters like Sen no rikyu are part of the history of ceramics here. I am working to make the tea utensils they used. By the time of the Momoyama era, pottery reached a golden age in the Mino province [the historic name of this region], and important forms of Japanese pottery were born here. The next generation potters need to take up this tradition again. Most young ceramists want to do modern pottery, but I feel a better choice is to mix the best of traditional ceramics with modern designs. I spent my college years in Kyoto, and when I came back I could see that what we have in Mino is something very special.”

the road to the old kiln site

We continue our walk up the hill towards the site for the old kiln and shinto shrine, the goal for our journey today. This is perhaps the most picturesque of all our walking courses in our series. The road is narrow and lined by pretty houses. Some are pottery studios or small factories. But where is that old kiln site? We keep on walking and soon we are lost. Google maps is not very helpful, we have to rely on a photo of a map produced by the local community. Luckily the weather is beautiful - by my Scandinavian standards this could be summer, although we are still in early March.
We end up in a bamboo forest that seems to be private land, and have to walk back again. This time we climb another narrow path up the hill, and in a while we spy a woman walking her dog down the slope from the opposite direction. We ask her for directions. "A shrine?" she says. "I am not sure about that." People who have moved here in recent years are probably not very familiar with the local history, perhaps she too is new to this neighborhood. She thinks for a while. "Oh, maybe I know," she starts walking up the steep hill. It's quite a climb, her dog has short legs but doesn't seem to have any complaints, it even has spare energy for jumping and playing as we huff and puff up the slope. "This is hospitality in the Japanese countryside," I think to myself. "Most big city dwellers couldn't be bothered to guide us this way."

On our way up the hill we passed this old warehouse, with typically thick walls and doors to protect the valuable goods inside.
The woman stops and points to the top of the hill. "That's probably the place you are looking for," she says. A gravel road leads up to the top, and we continue our climb. As we do so, we start to see shards of old pottery everywhere on the ground. This must be the kiln site.
Finally we reach the top, and find an open area with a small, simple altar. It has an inscription, reading Suiten-gū  (水天宮). The meaning of the characters is water-heavens-shrine from left to right.
Suiten-gū is the name of numerous Shinto shrines in Japan. The deity enshrined varies from place to place. Typically it is a protector of things related to water, such as ships, fishing, and agriculture, as well as children. Water is very important for ceramics production, and kilns were always built near water. Perhaps this is why this deity was chosen to guard this place.

There seems to be a deep relation between Shinto shrines and kilns. We started our first walk in this series near the Hakusan Shrine in Onada village. There are historic remains of very old kilns there as well. Although not directly related to pottery, there are Shinto deities related to earth and fire. Even the old Greeks saw a divine connection to pottery. Homer's Epigram's fragment 14, for example, says: "Come, then, Athena [goddess of pottery], with hand upraised over the kiln. Let the pots and all the dishes turn out well and be well fired." Kiln work was incredibly laborious and a bad firing incurred a substantial loss. It's not difficult to imagine that Japanese potters, too, sought divine help to avoid unwelcome results.

returning to the starting point

On our way back we passed a small ceramics factory - lots of cups and plates were lined up in front of the factory building. While there are no real landmarks along the road back, we noted the unusual name of the bridge across the water - o-inu-sama-bashi (the bridge of the honorable dog). "O" is a prefix usually used for things important or honorable, and "sama" is likewise often used as a very polite affix meaning "Mr. or Ms". "Inu" is dog, and "hashi" (or "bashi" as in this compound) is bridge. One wonder what kind of dog lived here that was honorable enough to have a bridge comemorating it.
​

As usual we provide a map you can use for navigation.
Click the icon in the top left corner to see legend
Kobei-gama Ceramics Studio Sakuto-kan Workshop Hall
Visit the Japanese site.
This facility allows visitors to experience pottery making using the 'clay' and 'glaze' used by the famous Koubei Kiln, which boasts a history of more than 210 years.
Their experienced staff will help you make your pottery. At the Sakutokan, you can make your own Oribe or Kizeto bowls by using the rokuro (potter's wheel) or hand-building (you can choose from 12 different glazes), and there are also underglaze painting and mosaic tile art experiences that even small children can enjoy.
Kobei-gama Kiln
Visit the English site.
Kobeigama Pottery was founded in 1804 and its tablewares were delivered as a purveyor to Shogun household to Edo Castle. Since then, we have continued to light its kiln for generations to produce numerous ceramics and porcelain works that have been in step with times.
During the long history of Kobeigama, it has been continuing to emphasize artistry, and Takuo Kato, the sixth generation potter, was designated a living national treasure by the Japanese Government.
The Mino Ceramic Village, which includes museum itself and surrounding buildings at Kobei-gama, has been awarded two-stars in the Michelin Green Guide.​