The history of the gohei mochi

the gohei mochi in the edo era

peeping at the past through the loupe of a recipe

This text is a summary of an in-depth e-book which is available here.

A waraji (straw-sandal) shaped Gohei mochi
How did ordinary people live in the past? That question has always fascinated me, and as I have by now lived more than half of my life in Japan (I am turning 60 in a month), I have a natural interest in how ordinary Japanese people lived in other ages. One of the most fascinating periods in the history of Japan is the Edo era (1603 - 1868), which was affluent and peaceful compared to the period of internal strife preceding it. At least this was true if you lived in Edo (today’s Tokyo) or any of the other major cities. People there began to be able to enjoy a greater variety of foods.

Somewhere between 80 - 90% of the population were farmers, however. Some of them lived in backward, impoverished parts of the country. My image of a peasant’s life in those times was that of an existence all about securing enough calories to keep going day by day.

Could it have been a farmer, then, who came up with the idea the Gohei mochi, a snack that packs delicious ingredients and a tremendous amount of calories?
​
​WHAT IS GOHEI MOCHI?
If you haven't heard of the Gohei mochi you are not alone. Until a recent TV drama in which this snack is featured, even most people in Japan were not aware of this food tradition. The Gohei mochi a very local dish indeed. If you would like to know more about the dish itself and how to make it, you might found our article and videos on that subject helpful. Simply put, this high-calorie, rich snack is a lump of white rice which is pounded and moulded into a largish, flat lump or small dumplings, skewered on a stick, dipped in a sweet sauce, and grilled over open fire. It is very rich and can serve as a quick lunch.

The best way to enjoy this dish is to travel to the Gohei mochi heartlands. We introduced a few great Tajimi shops our first article. You can, however, make the snack yourself with ingredients available in most Western countries.

the birthplace of the gohei mochi 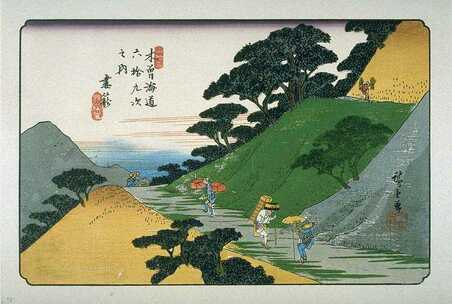 Hiroshige's print of Tsumago-juku, part of The Sixty-nine Stations of the Kiso Kaidō series. Tsumago was a post station on this famous trade route.
The Gohei mochi is the King of Sweets to many locals in an area in the central part of Japan's main island, Honshū. It is believed that it first appear on the stage of Japanese cuisine sometime in the middle Edo era (1651 - 1745), possibly somewhat later. The era is named after the the city of Edo (later renamed to Tokyo), where the ruling military junta was headquartered.

The Gohei mochi heartland, as I call it, is basically covering three of the prefectures in modern Japan - Aichi, Gifu and Nagano, and some of the bordering regions. After a deep dive in the many sources on the Net, however, it begun to look like the birthplace of this delicious sweet is somewhere in the landlocked provinces of Gifu and Nagano. These two prefectures - Nagano in particular - are mountainous, with limited arable land. The sauce contains ingredients that can be found in the mountains, such as walnuts. Sometimes even hornet larvae are used to achieve a richer taste. Eating insects is custom typical for the mountainous regions, because people needed to add nutritious foodstuffs to their diet. Other ingredients, such as sugar and refined sake (rice wine), were harder to come by in the Edo era. However, an important trade route - the the famous Nakasendō - connected Kyoto and Edo via this region. All sorts of high-grade food stuffs would pass there, and it is seems likely that some ended up in the Gohei mochi.
​ 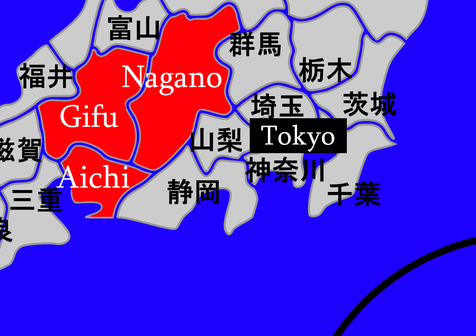 The three modern prefectures most people seem to view as the home to the Gohei mochi are Aichi on the east coast and Gifu and Nagano in the inland of central Japan.
“New studies of the Edo period were undertaken," writes the author of an article for Walk Japan, "and they began to show that although slow growth may have been the rule in the large urban centres, in the smaller cities and in many rural districts the economy continued to change and grow throughout the Edo period. [...] Along the Nakasendo [...] the Omi merchants stimulated commercial agriculture and rural industry. By the end of the Edo period, supposedly impoverished post-towns like Magome in the Kiso valley supported families that were quite well off." 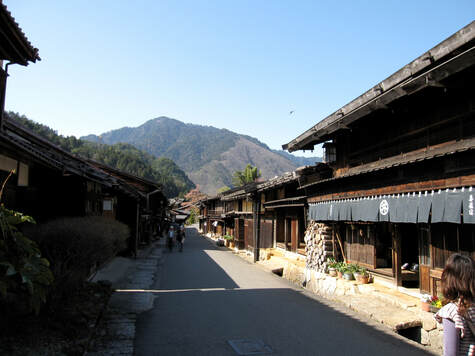 Tsumago was one of many towns in the Kiso area benefited from the trade route running through the Kiso valley. It was relatively prosperous and cosmopolitan town, with an economy based on currency.
​There were many towns in this area that benefited from this trade route. ​It seems rather likely that in places like this, well-to-do merchants and peasants would have enjoyed the occasional luxury of a Gohei mochi, and perhaps also the passers-by. But the latter is pure speculation on my part. Yes, there are Gohei mochi shops in the old towns along the Nakasendō today, but more research is needed to find out how far back their history goes. If you visit Tsumago-juku, for instance, which is a well preserved “living museum town” and the forty-second of the sixty-nine post towns on the Nakasendō, you will find the streets lined with Gohei mochi shops. The town is smack in the middle of the Gohei mochi heartland. Was it someone in this region - a merchant perhaps? - that came up with the idea of the King of Snacks?
​
​THE RAISON D'ÊTRE OF THE GOHEI MOCHI
Most popular theories about the origins of the Gohei mochi does not portray it as a business idea - a sweet that were sold to travelers on the Nakasendo.  There are three main stories about how the sweet came into being:Of these, the first seems the most likely. The ingredients of the Gohei mochi were expensive or hard or cumbersome to come by for ordinary peasants, and the very idea of an offering is sacrifice. You offer something of value to please the gods. There seems to be a connection here to the belief that the Gohei mochi was shaped to resemble the onbei, or staffs with plaited paper streamers used in the Shinto religion. There is also a strong connection to the mountains, because the gods were believed to live there, and some of these sacrificial ceremonies were indeed held in the mountains.

It may be the case that the Gohei mochi first was conceived as a ritual sacrifice, and over time became part of people's diet and a good for sale. But we do know that some of the villages in this area were extremely poor and white rice - the most important ingredient of the snack - would be seen as a luxury there long after the middle Edo era.

The ingredients in a historical context

The ingredients we used in our modern recipe to make Gohei mochi are as follows:

​All the ingredients were available in Edo era Japan. Most exotic in the list is perhaps peanuts. A different variant of this nut was first imported in 1706, and called Nankin mame. Sesame (goma in Japanese) have been consumed in Japan since prehistoric times.  The rest of the ingredients also have a very long history in Japan.
​Perhaps we can get some clues about how the Gohei mochi came into being by a closer look at the ingredients. White rice and sake were probably the most valuable to common people in the Edo era. Peasants commonly drank doburoku, “a slurry-like, unfiltered sake that had been brewed by local farmers for centuries”, as Melinda Joe wrote in her article "Reviving a rustic sake tradition” for the Japan Times. Sugar is described by some sources as expensive and hard to come by, but other hold that prices went down and laborers in the cities bought pieces of sugar to add calories to a meager diet. Sugar and mirin can substitute for Sake to improve the taste of Gohei mochi. Hornet larvae can as mentioned also improve the richness of the sauce, and cost virtually nothing.

It seems likely that ordinary peasants in the mountainous parts of Japan where the Gohei mochi may have its roots could get their hands on most of the ingredients we used, but could not afford to eat this rich snack other than on very special occations, such as the above mentioned Spring festivals for the gods. As one Japanese blogger put it, "they probably ate them after symbolically offering them to the gods". Variations of the recipe can be made to save cost. In particular, Sake can be substituted with mirin and/or sugar to bring out the umami in the snack.

It is important to note that even if peasants had been historically suppressed in the feudal society and burdened with heavy taxes that were paid in rice, this situation had changed to some extent by the middle Edo era. Farmers were now only required to pay a fixed volume of rice, and could keep the residue. Some of them were able to increase their wealth by producing more than they had to pay in taxes. It is in this timeframe that it is believed the Gohei mochi - essentially a rice cake, came into existence.

We now come back to my first question: could it have been a simple peasant somewhere in the mountainous parts of Gifu or Nagano that invented this luxurious dish? I believe so. But perhaps he was better-to-do than the average peasant. Perhaps he also had better access to hard-to-come-by ingredients such as sugar, or even refined sake (suishuu). I write about all of this in more detail in my free e-book on the subject.

There are many places in the Gohei mochi heartland with an oral tradition on how this calorie rich snack came into existence. There are even Gohei mochi study associations that research the subject. If history is any lesson, wealthier people could probably enjoy better Gohei mochi than common peasants, and more often. Over time, it slowly became a snack that the broader masses could enjoy more regularly, and with no skimping on the ingredients. But it probably wasn't until the last century that even people of the most humble standing could afford such a luxury. Still, the Edo era peasant's life depended on good crops, and we have reason to believe that they would make the greatest sacrifice they could of food and sweets to please them. The contingency of the gohei mochi appearing at the same time as improved economic conditions and better availability to the ingredients can not be a coincidence. The much beloved snack was born in a time when it was finally possible for it to be born. Most probably it wasn't the idea of a single man (or woman), but a parallel development over time in various places, that connected in various ways, and produced a variety of Gohei mochi over time. Perhaps there was even a man called Gohei involved at some stage. Or several Goheis.

​Tajimi is a great way for the traveler in Gifu to try their first Gohei mochi. Our city is a gateway not only to the Gohei mochi heartland, but also the wide variety of historic and cultural treasures you can find in the prefecture. Take the train from Nagoya and stop by at any of the great Gohei mochi shops here, and you will know what I am talking about.