Welcome to another walk in Tajimi!

This time we are visiting an area that is quite typical of what the Japanese call a shoutengai or "shopping street" - a cluster of shops in close proximity along and around a street - in our case the Ginza Doori. It is said that the origins of Japanese shopping streets can be traced back to the old days of Rakuichi (楽市) and Rakuza (楽座) - areas of economic activity that were established in the districts ruled by local lords in medieval times. In those days the country was engulfed in a hundred year long civil war. Raku (楽) in this case means "relief", in the sense that these areas were relieved of restrictions on trade to encourage economic development.

Interestingly, along the path we are walking today there is a monument raised in the honour of a local lord here in Tajimi, by the name of Tajimi Kuninaga. He has quite a dramatic and tragic life story, about which you can read in an essay we devoted to him. The Ginza Doori shoutengai and the area surrounding it does not go as far back as that, though. Before the Ginza Doori was turned into a roof covered arcade it was already a lively commercial center, and festivals such as the tanabata was held here every year. Legend tells us that each July 7 the weaver star and cowherder star traverse the Milky Way to renew their ancient bond of love. In Japan, the lovers are celebrated with lively decorations and wishes written on long, narrow strips of coloured paper.

Other forms of entertainment were available as well, such as the old Enomotoza theatre house, later turned into a cinema in the early Showa era (1926-1989). The theatre house was opened in year 15 of the Meiji era (1882). Tajimi is a ceramics industrial town, and young kiln workers, who gathered here from places far away, came to town in great numbers from the kilns in the outskirts of the city to enjoy movies during the 1940s and 50s.

We also must not forget a place that lives and speaks of the Showa era - the Morita coffee house. It is famous for being used as "Cafe Tiger" in the NHK Drama "Aishikute" broadcast in 2013.
The dimly lit interior is filled with chandeliers and shade lamps, giving it a genuinely nostalgic Showa-era feel.
Here some photographs from the start of today's walk.
​
Now we have arrived at the ​Ginza Doori. It rings with echoes from another time, when mom and pop stores flourished in the shopping arcades around Japan. Above the entrance to the street a large sign says "Shinmachi Ginza", which ironically speaks about a new town and new time coming. But that is already far back in the past. 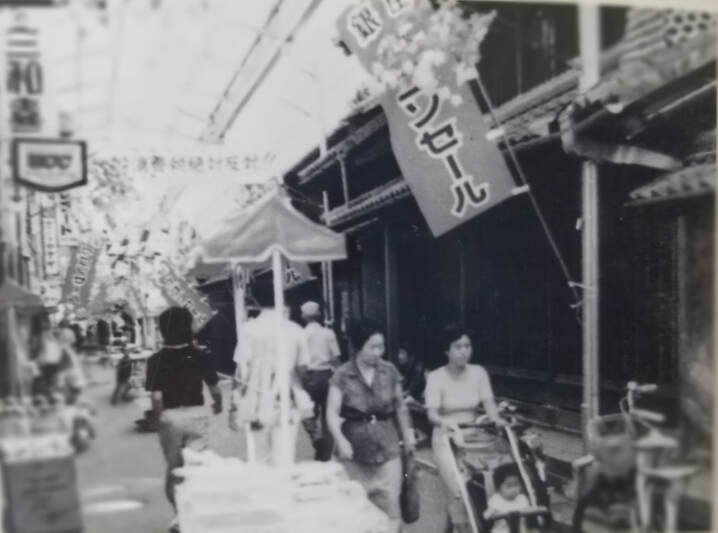 The old Ginza doori. The Sanwa shop sign can be seen up in the left corner, today it is a medical clinic with the same name. Courtesy of the Tajimi City Library Archive (多治見市図書館郷土資料室所蔵)
It's not easy to track down where old photos have been shot, but here we have help from a shop sign up to the left, that tells us that there was a shop with the same name as the medical clinic that is located there today - Sanwa. This lets us pinpoint the location to the one in the map here below. 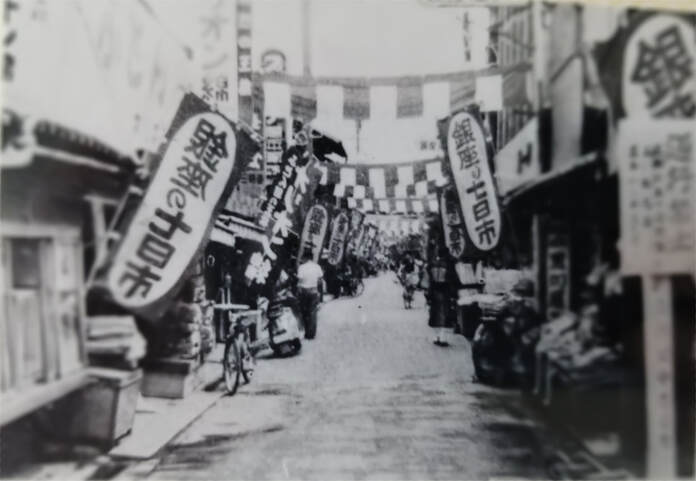 Courtesy of the Tajimi City Library Archive (多治見市図書館郷土資料室所蔵)
Here is an image most probably from the Showa era. No arcade roof has been built yet above the Ginza Doori. There is a sale going on, because the signs lining the streets on both sides say "Market of the 7th, Ginza". The market of the 7th was a sale on every day that ends with 7 in the month, so the 7th, 17th, and 27th. To the left of the sign a futon shop can be seen. The photo must have been taken at one of the ends of the street, because a sign to the side says this is a one way street.

The seeds of a movement to revitalize this area are beginning to sprout in Tajimi. Chuunichi Shinbun wrote the following in a piece about one of the young entrepreneurs involved in this.
"​Kazuya Hanayama (35), a ceramics salesman, is building a rental studio and a share house in a vacant shop in Tajimi Ginza shopping street in Shinmachi, Tajimi City. He is enthusiastic about the project, saying, 'I want to make it a place that will be a catalyst for various things, such as revitalizing the shuttered shopping street [Ginza Doori] and the activities of ceramic artists' ".
Find you way using our landmarks

We have charted a route around the area following Oribe Street and the old Shita-Kaido. Now it’s your time to go and explore!​
Click the icon in the upper left to view a list of all locations.
​

The tajimi kuninaga memorial - in memory of a local hero

Location of the tajimi kuninaga memorial

Some of the shops, cafes, and places of historical interest

Tajimi Kuninaga Memorial
Tajimi Kuninaga was a member of a clan which was descended from the Toki clan (Mino Genji clan). They were based in Tajimi-go, Toki-gun, Mino Province (now Tajimi City, Gifu Prefecture).
This memorial is raised at the remains of his residence. Kuninaga took part in Emperor Go-Daigo's plan to overthrow the Kamakura shogunate and entered Kyoto in 1324 at the invitation of Hino Suketomo.
The plan came to their opponent's knowledge, and they attacked Kuninaga and his allies in the compound where they stayed. The fierce battle continued past noon. A thousand warriors went around the compound and tore down the wall in the back street, pouring into the scene. Kuninaga must have realised this was the end. He lined up the defenders by the inner gate, and they cut each other down, falling dead to the ground. The attackers rushed in and took their heads, carrying them back to their base. The four-hour-long battle left 273 men dead.. You can learn more about Kuninaga in our article on the failed coup attempt.

Morita (モリタ)
Coffee shop
Morita is located in the middle of the arcade of the Ginza shopping street, next to the Tajimi City Industrial Culture Center.
It is also famous for being used as "Cafe Tiger" in the NHK TV drama "Aishikute" broadcasted in 2013.
The dimly lit interior is lit with chandeliers and shade lamps, giving it a retro Showa-era feel.

Tobun-do Book seller/publisher
This is the book seller that published the Tajimi-ben karuta cards, a card game we base our courses in the Tajimi/Tono-ben dialect courses on. The course has been a hit on YouTube, with the most popular post now having close to 300,000 hits. 14 Shōjimachi, Tajimi. Map here.
Note that the place they actually sell books is different - HirakuBiru, which you will find here.
​Hishiya Cafe (喫茶ひしや文具店)
From the company home page: "We are a stationery shop with a café in Tajimi City, Gifu Prefecture. The café is a peaceful space decorated with mosaic tiles by the late Ken Sone. The café is decorated with the mosaic tiles of the late Ken Sone and offers a relaxing atmosphere with coffee, tea and cakes. The stationery shop, which has been in operation for over 80 years, displays old-fashioned stationery, office supplies, Japanese paper and stationery goods." Map here.