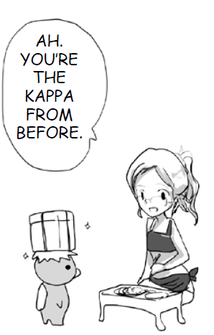 We are about to embark on a new, exciting project for this season. We will use 3d technology to present a comic produced locally here in Tajimi, in new and - we hope - fun ways. To give you some background I wrote up this piece about a scene in the comic and some of the history and culture that ties into the story.
​
Download backnumbers
There is a stream behind our house called Takatagawa that adds quite a lot of life and vitality to the area. It serves as the borderline between our village - Onada - and Takata village on the other side. In the old days, people thought creeks and rivers were inhabited by a strange creature or Yōkai (妖怪, ghost, phantom, strange apparition) as the Japanese call them. It's known as the Kappa and it's one of the most popular in Japanese folklore. There is a lovely dreamy scene where it appears in "Yakunara Mag Cup Mo", a manga set in Tajimi. When I read it my thoughts went to the creek behind our house and the beings that might dwell there. 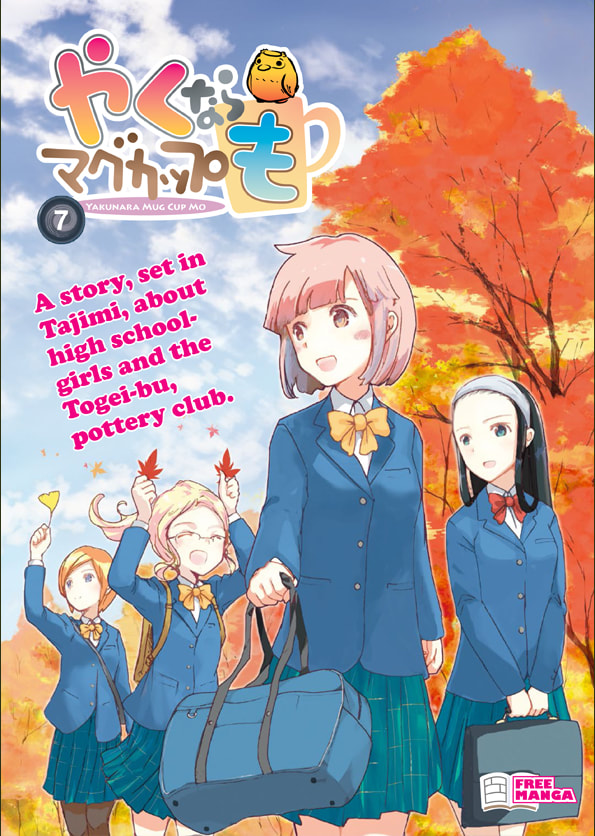 ​Our brook attracts all kinds of birds. There are a pair of beautiful white egrets visiting us quite regularly, walking up and down the stream hunting for prey. There are kingfishers, and at night a gang of ducks come by. You can't see them, but you can tell they are around by all the quacking. There is an occasional mountain dove, as well as crows and of course the sparrows. I am the only person in the neighborhood, as far as I know, who feed the sparrows, an old habit from my childhood in Sweden. They come around and fight over the seeds every day. A bullfrog settled down here once and honked its tuba-like horn during the summers. An impressive sound but it started to get on my nerves.​ Other visitors include school kids. Our creek is a standard summer excursion spot, and we are frequently woken by the voices of dozens of primary school children. They swarm up and down the stream in their white hats, hunting for little creatures with nets.
The tree the flood could not defeat
click to view
The stream can be your friend and sometimes a foe. In times of flooding it grows fast and strong, carrying all sorts of things past our house. It was very close to carrying away a tree in front of our house, bending it flat to the ground. But the tree just wouln't lose its grip and rose again, obscuring our view of the landscape. I have the feeling it washed away the bullfrog, however. I haven't heard the tuba since that day.

Now, what is all this fuss about water monsters? you may wonder. What I am referring to is the most famous of all the Yōkai - the Kappa. 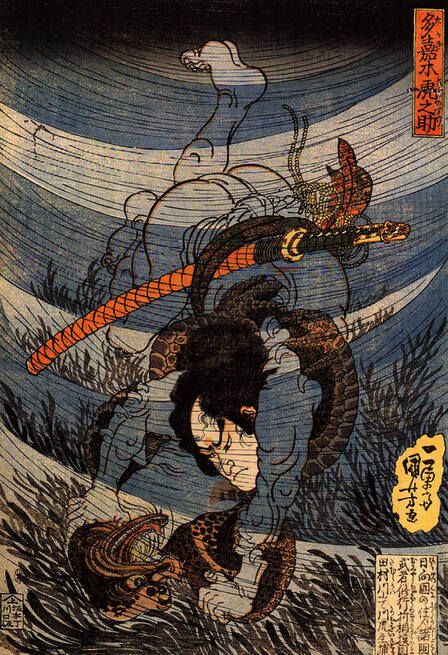 Capturing a Kappa alive. Ukiyo-e style of woodblock print by Utagawa Kuniyoshi (1798 – 1861)
"A kappa (河童, river-child)", Wikipedia states, "is an amphibious yōkai demon or imp found in traditional Japanese folklore. It is also known as kawatarō (川太郎, 'river-boy'), komahiki (駒引, 'steed-puller'), kawatora (川虎, 'river-tiger') or suiko (水虎, 'water-tiger').
They are typically depicted as green, human-like beings with webbed hands and feet and a turtle-like carapace on their backs. A depression on its head called its "dish" (sara), retains water, and if this is damaged or its liquid is lost (either through spilling or drying up), the Kappa is severely weakened." 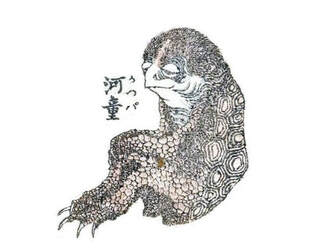 Katsushika Hokusai's (1760 – 1849) rendering of the Kappa has a sweet touch to it.
We have a saying in my homeland Sweden: "A beloved child has many names." One of the names for this yōkai that caught my interest was "steed-puller". In a commentary on an academic book (1) on the subject Katsuhiko Tanaka writes that:

"The legend about how the Kappa tries to pull a horse into the water that is prevalent all over Japan is also found throughout the Eurasian continent, from the Korean Peninsula to Europe. Behind this relationship between horses and water gods lies the role of cattle in an agricultural society."
​
Like many other things in Japanese culture, it seems that the Kappa has it's origins elsewhere, but people here have an excellent talent for spicing up the legends, and they have done a good enough job to attract interest from around the world. As you will see in the film below, some people even speculate that the Kappa came from some other planet. It's a theory that probably needs to be taken with a grain of salt.
Some of the behaviors attributed to the Kappa belong somewhere in the borderland between the bizarre and the comical. "They are often accused of assaulting humans in water and removing a mythical organ called the shirikodama [literally 'small ball in the bottoms'] from their victim's anus."

Dear oh dear, the people who came up with that one must have been as naughty as the Kappa itself.

mika-chan's encounter with the kappa 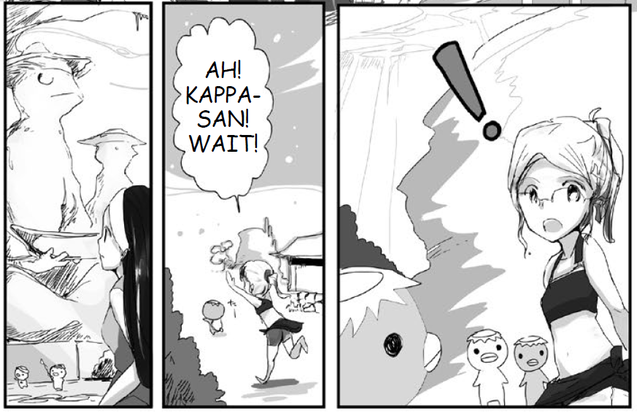 Mika-chan encounter the Kappa
​In "Yaku Nara" Mika-chan, one of the main characters in the manga falls asleep and find herself and her friends in the land of the Kappa. It's not a coincidence that the girls meet the Kappa, as it is a symbol of Tajimi. Well, to be correct, the mascot is a mix of an eel and the Kappa. Eel is a local delicacy here as you can read in this article. Water is important for ceramics production, and Tajimi, a pottery town, is blessed with many streams and the great Toki river. The idea of the Unagappa - una for eel (unagi) and gappa for the Kappa - isn't far fetched. 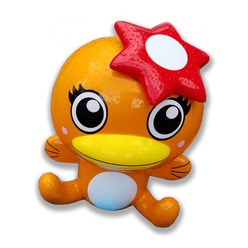 The Tajimi symbol - Unagappa - is an offspring of an eel (unagi) and a Kappa.
Mika-chan finds herself underwater with an entourage of little kappa. Perhaps they are at the bottom of the great Toki river that flows through Tajimi. There is an eel in the picture, or unagi in Japanese. A diet heavy on unagi is said to have kept the kiln workers healthy during the hot summers in the area. The unagi is a freshwater eel and high in saturated cholesterol and fat.

​There is a myriad of tales about the Kappa around Japan, and not surprisingly Tajimi has some as well. The authors of unagappa.com recount one of them:

"Many, many years ago, there was a terrible drought in Tajimi, and the rice fields were on the verge of drying up. The people of Tajimi Village worshiped Kappa-sama [sama is the polite way of addressing someone], whom they believed to be the messenger of the water god. So they beat their drums for many days, praying for the rain to fall. 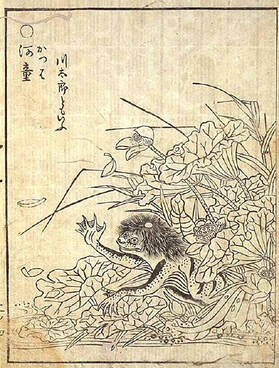 Kappa. — From Gazu Hyakki Yagyō ("The Illustrated Night Parade of a Hundred Demons") by Toriyama Sekien
​Finally, like a blessing from heaven, a few drops fell, and then a few more, and the rain came, and the seedlings grew again. In the autumn of that year, the rice harvest was truly splendid.

Ever since that time, the villagers beat their drums every year, praying that the Kappa-sama would bless them with rain. The good harvests continued for a long time, and everyone was happy. But one day the villagers, not knowing better, moved Kappa-sama's shrine to the bank of the Toki River. This greatly angered Kappa, and instead of bringing just enough rain, he let a massive downpour flood the land. The water rose and immersed the village, and the rice fields and homes were washed away. There were even rumors that the Buddha at the temple had been carried by the water all the way to Owari. 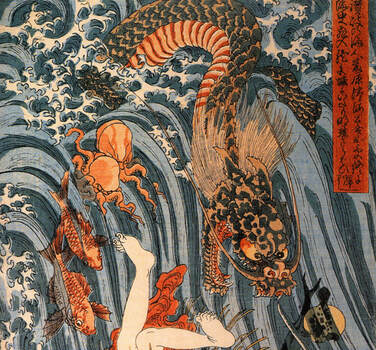 Ryujin, detail from painting by Utagawa Kuniyoshi
​Hoping for help from elsewhere, the villagers beat their drums and called to Ryujin - the Dragon God - who came to their aid and broke the plate on Kappa-sama's head. The flood was sucked back into kappa-sama's plate, and suddenly, all was quiet. Kappa, with a broken head plate, weak and hard of breath, knelt at Ryujin's feet. That pleased Ryujin, and he put a new plate on Kappa's head, and the two drank a toast. After Kappa promised not to make more mischief, the Dragon God allowed him to settle down in the Toki River.

Kappa took pleasure in his new residence, for the river was full of eel. The workers at the kilns in Tajimi ate them to stay strong and healthy. Now Kappa could feast on the eels himself. He grew strong again, and from that time, even in the hottest days of Tajimi's summers, he thrived, living as a good neighbor with the villagers."

In spite of all the mischief the kappa is believed to make, he is one of the most beloved creatures in Japanese folklore. If you have a minute or two to spare, take a look at these clips from some old sake commercials where kappa is the main character. I am sure they will put a smile on your face.
A collection of old commercials for the Kisakura (黄桜) sake brand