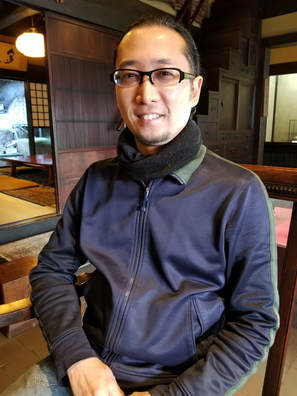 Ryotaro Kato, son of the 7th master potter at the Kobe Kiln. Kobei Kato founded the kiln in Mino-no-kuni 1804.
By now we have introduced the city of Tajimi from a number of perspectives, including life, food, and not the least pottery. After all, Tajimi is part of the Mino area, which is the largest production centre for ceramics in the world. Some of the most famous styles of pottery were born here. Several Tajimi potters have been recognised as Living National Treasures by the government. Yet all this is very little known in other countries.

In the back of the facility you will find an old climbing kiln (anagama) that is still fired a few times a year. Look up to see a beautiful autumn foliage.

This time we visited a renowned kiln in the world of Mino ware — the Kobe-gama. Master potter Ryotaro Kato (44) received us in the office on a fine, sunny November day. He is a fast but well-articulated speaker, and you can feel his energy and passion for ceramics. Today we met him to learn about Persian lusterware and its revival here at the Kobe-gama. On the second floor in the main building, there is a wonderful little museum exhibiting fantastic lusterware. The kiln has a strong connection to this Persian art form.
​
A 360 view of a section of the lusterware museum in the Kobe kiln main building.

Kobe-gama Pottery was founded in 1804 in Ichinokura town in Tajimi, by first-generation founder Katou Kobe in Mino-no-kuni, who dyed and supplied tableware to high-rank customers, including the lords of the enormous Edo castle in present-day Tokyo. Ryotaro is the son of his 7th successor and a young force for the revival of the Mino region and an increased awareness abroad about this major Japanese pottery tradition. In spite of its impressive tradition the kiln is still not well represented abroad and is presently working to establish itself in China, Europe and elsewhere. By contrast, the master potters of the Kobe-gama has played an important role in bringing foreign ceramic culture to Japan. The late Living National Treasure, Takuo Katō (1917–2005), who was the sixth-generation master ceramicist of the Kobe-Gama Pottery, was the man who first found interest in ancient Persian lusterware ceramics. It’s beautiful blue and three-colour glazes inspired him to revive the techniques of the Persian potters that had been completely lost after the 17th century.
​
​The journey to success was a long one, as there was no information on how the old Persians made their lusterware. Finally, Kato came upon the research of a deceased American professor, Arthur Upham Pope, at a visit to Pahlavi University in Tehran. Pope was dead, but fortunately, his wife was still alive and showed Pope’s work to the Japanese ceramist. Kato now realised that not only was the clay used by the Persians different from that in Japan, but glazes included lead, tin, sodium, and other ingredients not utilized in the East Asian ceramic tradition. Furthermore, the lusterware kilns needed to be small. They could only accommodate a few pieces at a time and the firing temperatures must be kept quite low.
​
“The most important finding,” Ryotaro explains, “was the construction of the Persian kilns. They were designed in such a fashion that the flames of the fire could not touch the ceramics directly. Thanks to Pope’s research Takuo realised that it was the combination of the metal oxides in the glaze and the peculiar kiln design that the enabled the ancient Persians to produce their luster ware. With this insight, Takuo could now pursue his research in earnest. There were so many parts of the puzzle to this great mystery. The clay used by the Persians was different from here. It includes lots of salt and magnesium, which makes the ceramics fragile. It is also less heat resistant than Japanese clay. If you fire it at high temperature it falls apart and melts. In Japan and China, we usually fire at 1200° Celsius, but the Persian had to keep the temperature as low as 900°. This also contributes to the fragility of Persian luster ware.”

To illustrate Ryotaro brings an ancient looking piece of pottery from a shelf. 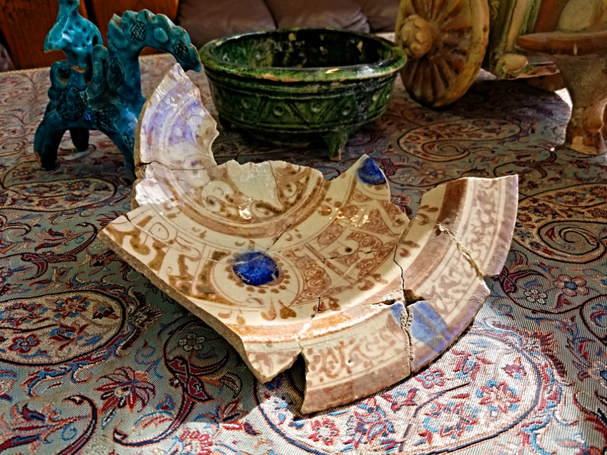 Most ancient lusterware that is excavated today is broken. It is a very fragile type of ceramics.
​“As you can see this one is broken,” he says, “and most of the lusterware we find is. Takuo brought Iranian clay home and attempted to reproduce the classic Persian ceramics, but failed. He soon began using local clay from this area and was able to produce much stronger pottery that way. He glazed it according to the Persian way, however, so the end result was a hybrid. That is why the lusterware we make is strong.”

“What is special about lusterware,” he continues, “is that the colours shift depending on your viewing angle. It reflects light beautifully, but to produce ceramics that reflects light in this way is very hard. If the firing fails the ceramics comes out completely matte. A large part of the pieces from every firing are failures.”

“Another important difference between Iran and Japan is the humidity,” he continues. “The climate in Iran is extremely dry. It’s desert climate is ideal for lusterware production. By contrast, Japan is very humid. On a rainy day the firings fail quite often. On top of that, the lusterware kilns need to be small in size, so production volume is modest. Because of this, and the large number of failed firings, it is not feasible to produce lusterware for a volume market, like tableware.”

“Takuo fell in love with the blue colour of these Persian ceramics, but what kind of blue is it? I ask.

“Ah, the Persian blue,” says Ryotaro, and brings another piece. 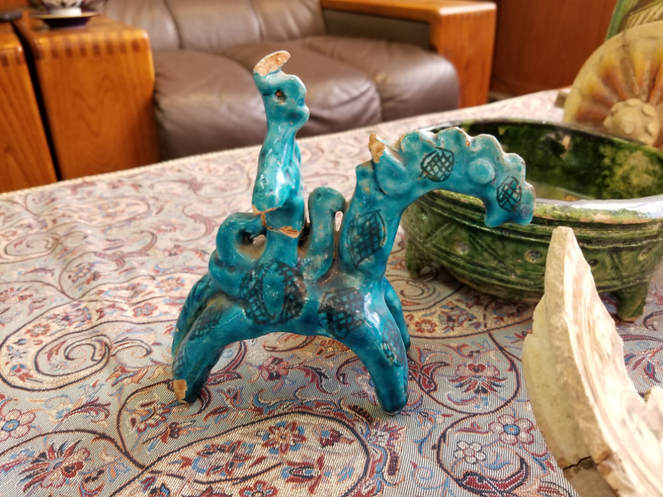 Takuo Kato fell in love with the blue colour of the Persian ceramics
​“This is also an old piece,” he says. “It is said that this kind of glaze is extremely old, and the blue colour is achieved by adding copper. It’s a very simple technique, but there was no equivalent in China. On the other hand, there have been many findings of this kind of blue pottery in the graves of the Egyptian pharaohs. The Mesopotamians also made this kind of pottery, it was common in the region. It is easy to imagine that the blue colour of water brought the image of life to mind in a world of deserts.

​“What about the blue in this piece?” I ask, and point to the first one he brought.

“This is an effect of the cobalt in this glaze,” Ryotaro explains. “This kind of colour was produced in China as well. The Middle East and China are the oldest production regions when it comes to ceramics, and they were connected by the Silk Road. There must have been plenty of opportunities for exchange. As for the Persian blue, such pottery have been found in China, but they never seem to have produced it themselves. Green pottery was made there, however.” 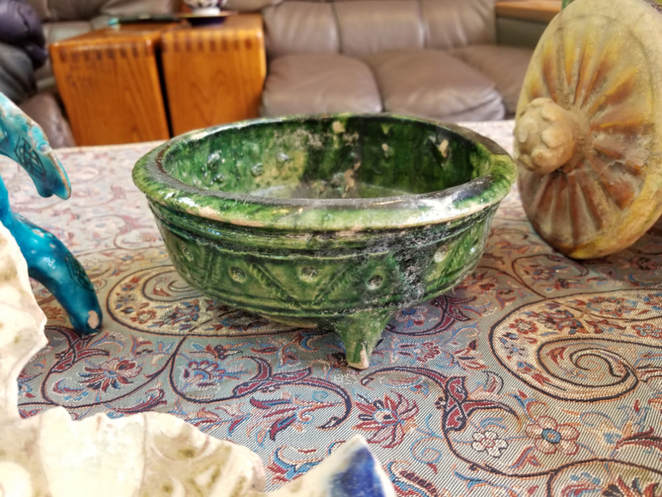 Copper was used both to achieve a blue colour and a green, like in this Chinese piece.
​He brings a green piece. “This was made in China, but the same kind of pottery was produced in Persia as well. Interestingly, copper is also used to achieve the green colour. Depending on the components in the glaze, the colour will change this way.

“What about the three-colour glazes?” I wonder.

“Okey, that’s what we call sansai in Japanese,” he replies. And again he brings a sample.

“This one is from ancient China. The three-colour glazes are normally green, yellow and white. This particular piece is from the 8th century. The technique was transferred to Persia where it became the Persian three-colour glaze. When it arrived to Japan it had developed to a seven-colour glaze. As techniques like this crossed the continent, variations developed in different areas and the spectrum of glazes widened.”

“Dr. Seyed Abbas Araghchi, who was Iranian Ambassador to Japan at the time, visited us after having heard about our luster ware [Araghchi was ambassador 2008 - 2011]. He became very excited and said this exchange with his country should be expanded. My father and I traveled to Iran and did an exhibition at their National Museum. My father’s works was the focus of the exhibition, but Takuo’s ceramics were exhibited as well along with Iranian works, both ancient and contemporary.

“I was responsible for the exhibit, and while there are cultural differences regarding how these things are done, all went well in the end. It was very well received, and discussions started about further exchange between us. Iran was invaded by the Mongols in the 13th century and the kilns were ruined by them. The lusterware culture had vanished from the country by the 17th century. It wasn’t until Takuo’s reproductions that the artform was brought back into the limelight again. Young ceramists in Iran were impressed by his efforts, and several were inspired to start their own production. Two ceramists came here two years ago and stayed for three months, studying various techniques. We expect two more next year, so it’s an ongoing exchange. It’s a very difficult skill to master. We have different approaches and the Iranian’s have a tradition they want to revive, of course, going back to the original ways. But our exchange is a meaningful one and we look forward to develop it further.”

While the Kobe kiln ceramists have contributed greatly to the revival of Persian ceramics, Ryotary now looks to revitalise Minoware.

“Famous samurai lords like Oda Nobunaga, Toyotomi Hideyoshi, and Tokugawa Ieyasu, as well as tea masters like Sen no rikyu are part of the history of ceramics here. I am working to make the tea utensils they used. By the time of the Momoyama era, pottery reached a golden age in Mino, and important forms of Japanese pottery were born here. The next generation potters need to take up this tradition again. Most young ceramics want to do modern pottery, but I feel the best is to mix the best of traditional ceramics with modern designs. I spent my college years in Kyoto, and when I came back I could see that what we have in Mino is something very special.”