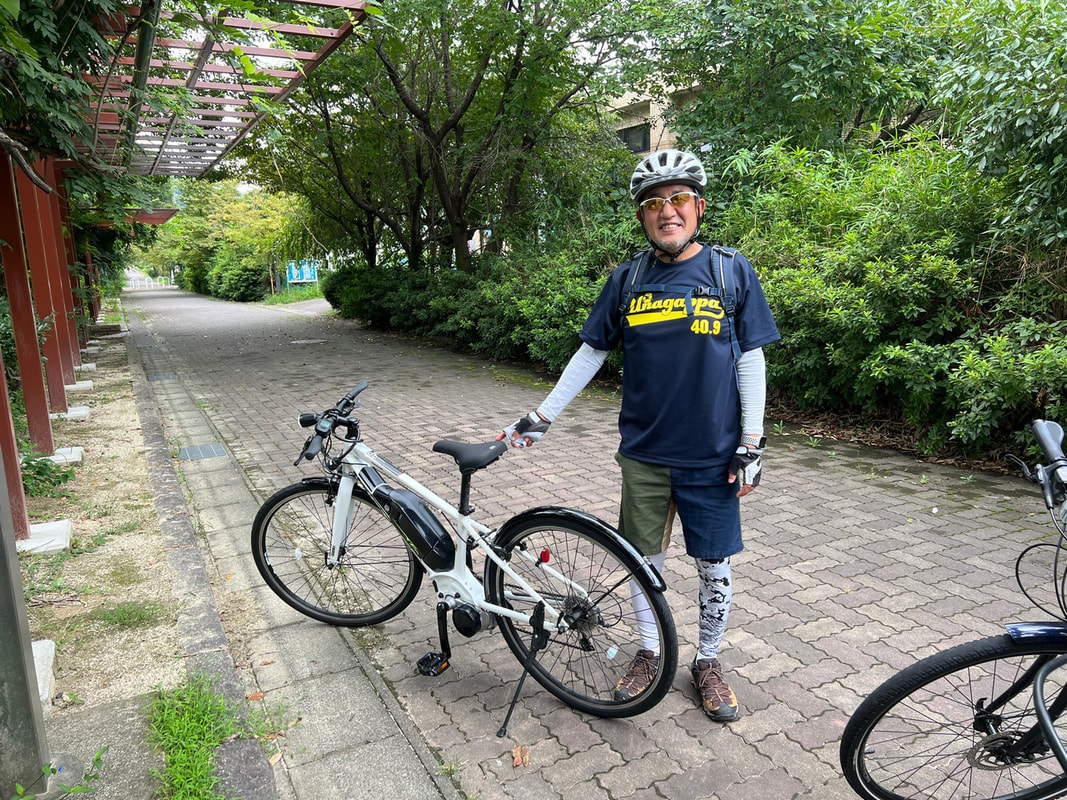 Having spent almost a decade in Tajimi City by now, I thought I had seen most of what was to be seen. How wrong I was! It was a pleasant day in August, with an overcast sky and a pleasant breeze, when we set out on our first cycling tour around the city, and a whole new perspective opened up on the area for me. 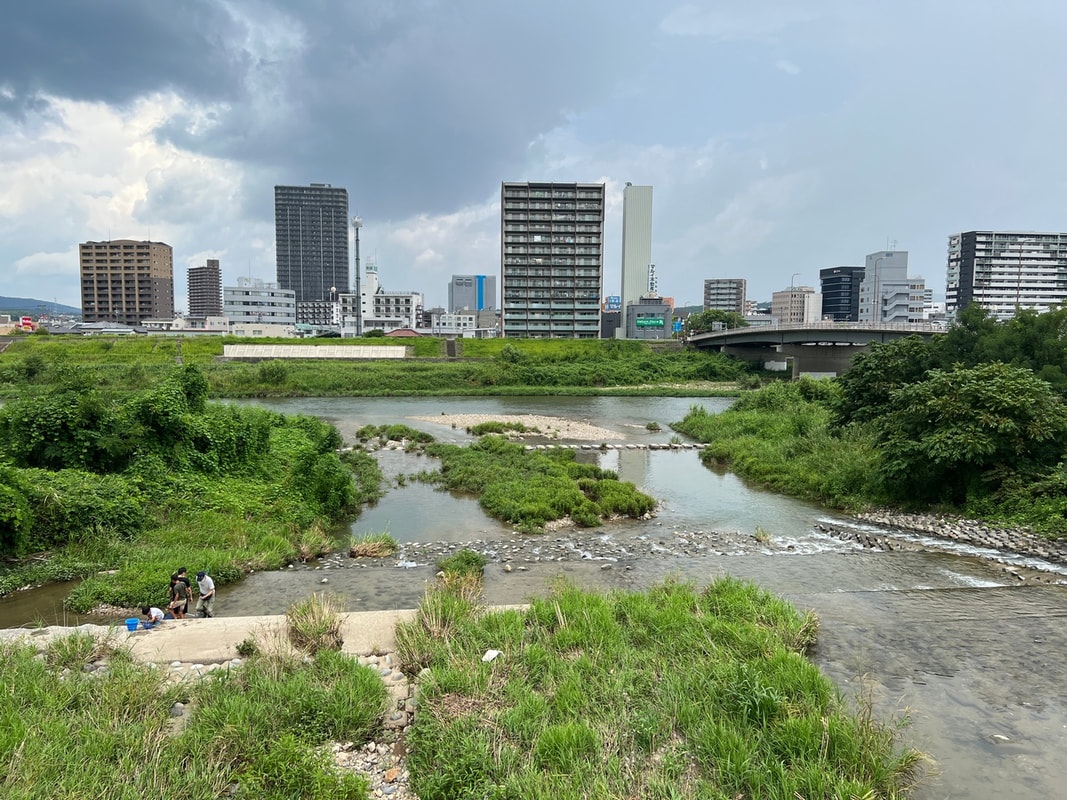 Caption: Gliding through the cityscape of a countryside town on a bicycle opens new perspective. Here a view over the Toki river, where kids and their grandfather (?) are are catching little river creatures.

Don't get me wrong, I have done a lot of cycling around the town recently since we bought a nice little foldable e-bike. This day, however, we were to be guided by a pro, an employee with Tajimi Tourism Association's rental bike unit. It turned out to be one of my most pleasant days in a long time.
​
Caption: Here we are traveling on one of the most popular cycling routes for tourist--the old rail track from Tajimi Station to Kasahara

​We were greeted by Mr. Namiki, a good natured man in his best years, fit from biking and running, and wearing a well-trimmed beard. He has a very pleasant way of speaking, a little on the slow side, which makes you feel that he is careful to make himself understood. I knew from the start that we were in good hands.
​
​The bikes were prepared for us with properly pumped tires and were ready to go after some instructions. The rental office has a nice selection of bikes, many of them equipped with electric motors to assist the rider, which is especially helpful in Tajimi's somewhat hilly terrain. E-bikes are very popular and really make a tremendous difference during a long tour, making long, tough climbs almost effortless. Well, not completely effortless if you are overweight and not very fit, like myself, but far less painful.
​
​This day, Namiki-san had picked three of the nicest bikes for us, all city bikes but good for quite long rides out in the suburbs of the city and beyond. Apparently, they all come at a price of around 300,000 yen, which is quite pricey, but you could feel the quality right when you started riding. I got to ride an American-made bike of good quality, quite light and fitted with five modes of electric power assistance, from none to turbo mode, and nine gears. My wife got a small, similar model more suitable for smaller ladies, and Namiki-san himself started out on a very futuristic Dutch bike that was fully automatic, so no need to change gears manually.
​
​Namiki-san was very careful to give us safety instructions, including hand signals to communicate with the two of us behind him about turns, possible slip zones, when to stop and so forth. In Japan, in principle, you should ride a bike on the road, but people often prefer to ride on the sidewalk for better safety. This is a bit of a gray zone legally, but at least for some sidewalks, bikes are allowed on the sidewalk. It is a very different matter to ride in a city like Tokyo, where sidewalks are often very narrow and full of people, and where people can suddenly step out in front of you. One important thing is, of course, that Japan has left-hand traffic, which may take some time to get used to if your country is different. Helmets were included in the package, which I really appreciated. There is no legal requirement for cyclists to wear a helmet in Japan. As for other equipment, Namiki-san came better prepared than us, dressed in proper cycling wear and shoes, sunglasses, etc., but you will need to bring that kind of gear yourself. It may be quite well worth it if you plan to spend a lot of time cycling while in Japan.
​

This day we would end up cycling around 19 kilometers, which I had not anticipated, and it went surprisingly fast. We started cruising along flat streets in the city; with my electric motor set to sports mode and gear 7 (of 9), it felt incredibly effortless.
​
​After about a kilometer, we began to climb the steepest hill along the course. It's a very long slope, so most people on normal bikes get off and walk. I have climbed it many times before on our small foldable bike without problems, but the two riders in front of me didn't seem to slow down one bit as compared to the flat streets! I quickly fell behind and had to strain myself to catch up. I began huffing and puffing. But soon we had reached the top, and by now I had joined the other two again.
​
​A few more minutes and we reach our first stop, the only one on this route, in fact. The information kiosk for the Eihoji temple sells delicious goheimochi dumplings, and we had a serving each. There are nice and clean toilets here (most public toilets in Japan are). There are also seats and tables, and beer is served-a pleasant place for a party indeed!
​
​The ride continued along a small road on the other side of the railway that I had never traveled on. I began to appreciate how lovely it is to travel this way, engulfed by the lush greenery on both sides. We briefly stopped to inspect a nice eatery I had never heard of before.
​
​From now on, it was all downhill. How nice! Another cyclist zipped past us. The wind was so pleasant in my face, and there were hardly any cars. The wind was so pleasant in my face, and there were hardly any cars.
​
We now reached a bridge across the Toki river, where there is farmland and a beautiful bamboo forest. The old farmer arrived in his little truck with farming equipment. He put on one of those pointed bamboo hats and looked so charming that we had to compliment him. He smiled. He didn't have many teeth left. "How many times have I passed in my car here and never had a conversation with him?" I thought.
​
Caption: Before we crossed the bridge across Toki River we switched bikes. Namiki-san instructs my wife Kana on how to ride the very futuristic, fully automatic Dutch e-bike.

We crossed the river and continued a bit on flat land, passing a place where my wife saw a wild boar sow and her piglets once. Before too long, we were already approaching the city centre. At this point, we made a turn and entered the well-known former railroad, which is now paved for cyclists and pedestrians. Mr. recommends this road as the first choice for tourists on bicycles.
​
Everyone along the road greeted us and smiled. At one point, we stopped, and Namiki-san pointed to the side of the road. "There is a very old lady here that serves something," he said. But it depends on how she feels that day, so you never know when her shop is open."
​ 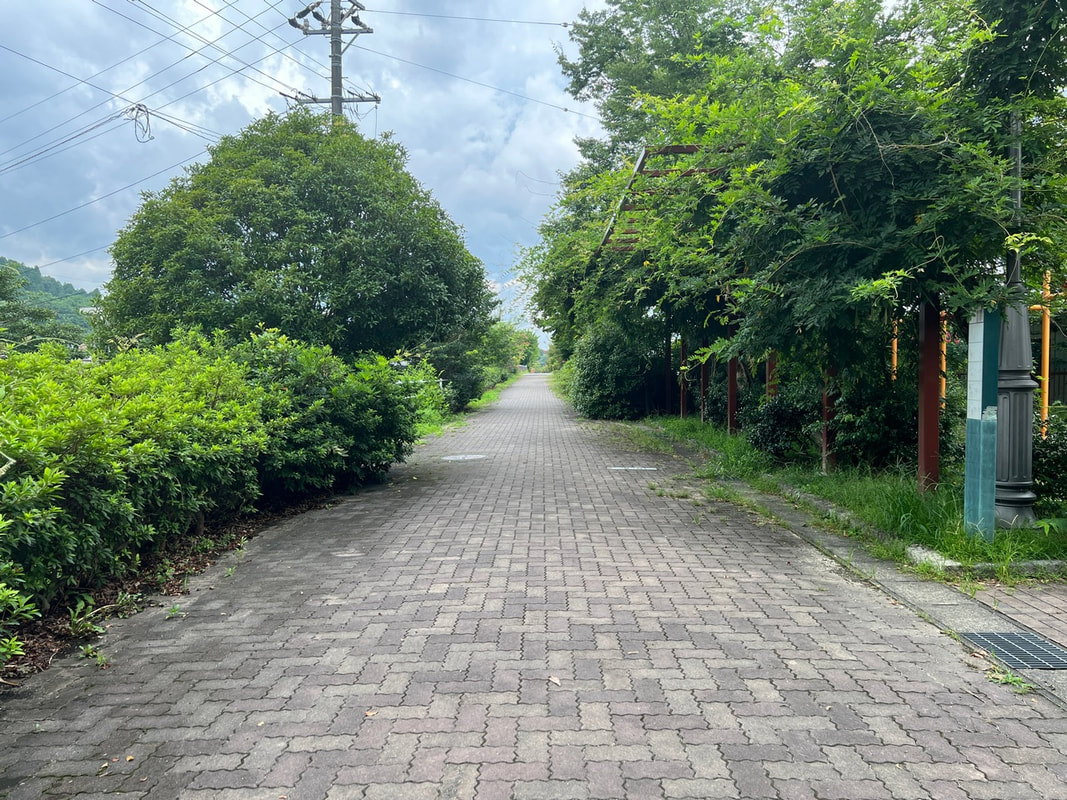 Caption: The paved old rail track where steam engines once ran
​Well, this was a detour, but normally you would go all the way to Kasahara and visit the tile museum. The road is lined with cherry trees in the spring, and you can take in the pink clouds created by the cherry blossoms. After a while, we turned back, and soon we arrived at our starting point. I could hardly believe we had covered almost 20 kilometers. I felt as though I had learned a whole new side of Tajimi, my current hometown in Japan, in this short time.
​

The rental cycle service organise- fun tour projects from time to time with a bit of a tour of the town. Please feel free to join. Some of the tours offered are Rediscover the Tajimi suburbs Long Ride Tour, Maruman Shokai's second ceramic factory tour, or the Ceramesse Second ceramic factory tour. Prices start at around 2,300 yen.
Please refer to the rental service web site for tour examples. Click the English language menu at the top right for the English version.

The map here below shows an overview of places interesting to visit or helpful to cyclists. To enlarge or shrink the size, use the Plus and Minus icons.
​

Starting Prices
​
​Here are a number of rental fee examples for some of the models.