a master of mino ware 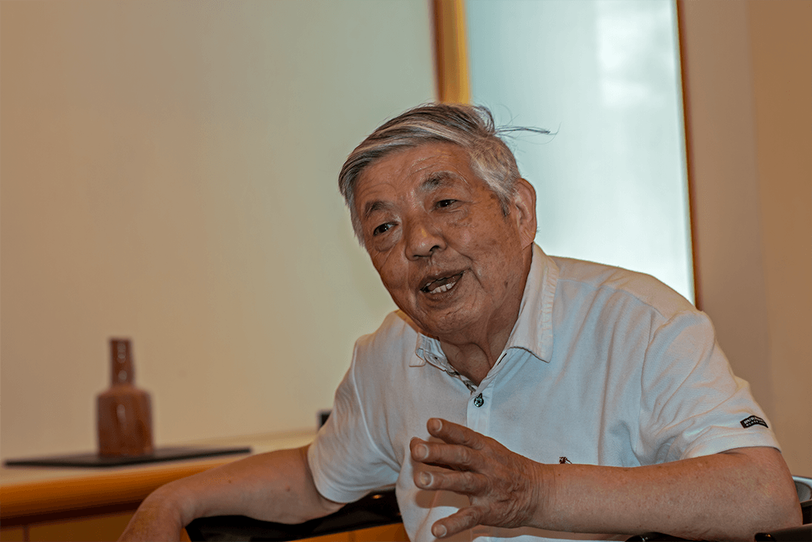 Hidetake Ando - Master Mino ware potter
Ichinokura is a pittoresque village in Tajimi known as a pottery enthusiast’s paradise. There are a number of kilns here, some famous and some lesser known but still very well worth a visit. Ceramic festivals are held here every year. Here you will also find the Sakazuki Art Museum that introduces the work of local living National Treasures. This village is the home of Hidetake Ando, a master well known in Japan in particular for his Kiseto works. We met him in his gallery a warm and pleasant day in early June. In spite of his fame there is nothing pompous about him. At 80 his face is now wrinkled, but everything about him is friendly and warm and smiling. He speaks in a particularly thick version of Tono-ben, the local dialect. Although hard to follow sometimes it certainly adds to his charm and enriches his personality. Indeed it feels inseparable from his personality. It is charming, warm and down-to-earth. 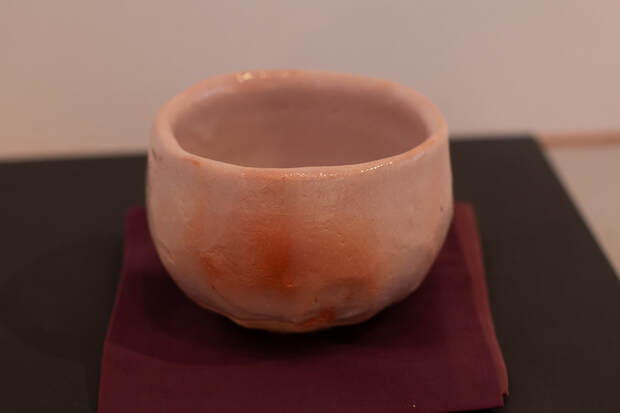 Tea bowl - akashino (red shino) chawan
"Pottery is truly difficult. I have been doing this for 60 years and I still can’t get things to look like I want. I started at the age of 20, and now I am 80," he says. This is a thread running through our interview. The true mastery of Mino ware pottery is an illusion, but that is also why you never end up chasing it, never tire. Because its unpredictable and fun.

"My father was an ordinary ceramics worker, like many others in this area. I too began by producing small , white porcelain plates. I sold them for a song. But was this all there was to life? I asked myself. I began to feel a strong urge to do something different. Not knowing what to do next, I was lucky enough to cross paths with the famous potter from the nearby town of Seto, Tokuro Kato. “Don’t waste your time with mass produced ceramics,” he said. “After all you are living in Mino. Devote yourself to the ancient ceramics tradition we have here, be it Shino or Oribe or whatever you like!” That is how I entered the path to Mino ware pottery."
Meet master Ando in this interview from June 2019.
Didn’t you hesitate in taking such a drastic step? After all people who can make a good living as a master potter are few and far between?

Not at all! Of course, there was the problem of the masters completely unwilling to share their knowledge and skills with anybody. There was no other choice but to start from scratch trying to figure everything out. In their mind, everyone must acquire their skills without hand holding. To imitate others was theft to them. Besides, they were too busy researching and learning themselves! You hand to learn by failing over and over again and learning from your mistakes, and failing was all I did during the first years! 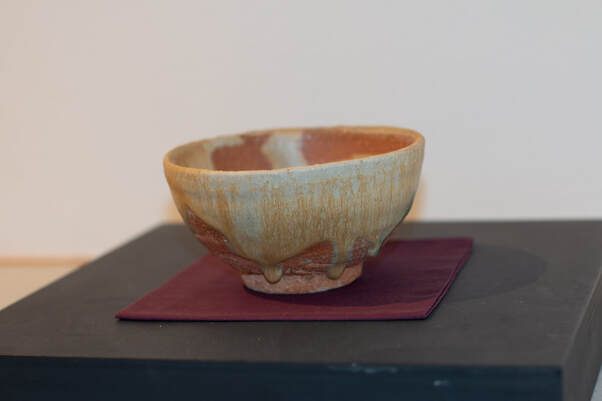 Tea bowl - Kiseto Hirajawan
But how could you make a living under those conditions?

It was really tough! Well, I had to produce something that could sell to stay afloat, but I felt all the time that it wasn’t enough to satisfy my ambition. “Is this all I will accomplish for the rest of my life?” I asked myself. And I decided I must start creating my own world.

I started by walking around in the mountains trying to find the clay needed to make classic Shino and other Mino ware. True Mino ware can’t be made from clay you buy. I eventually found it in the hills around Kani city, near Kukkuri and other places. There is an ancient pottery tradition there dating back to the Momoyama era - the golden age of Mino pottery. 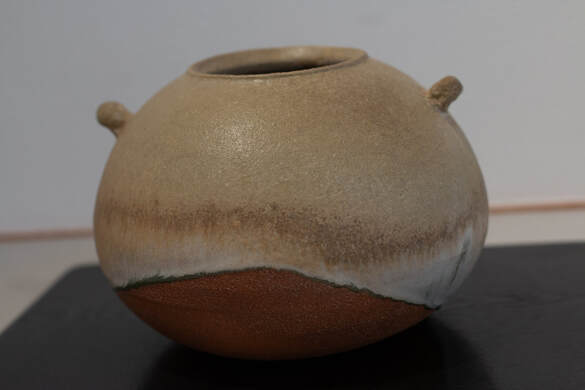 Kiseto Mizusashi (water jar for the tea ceremony)
You have become well known for your kiseto ware, haven’t you?

"Yes, and the name of kiseto (yellow Seto) is misleading. It’s a form of pottery made from clay here in Mino."

You said you had to start from scratch and nobody would share their knowledge with you. Does that mean you even had to build your kiln with no advice whatsoever?

"Yes, indeed! I started out with a common gas kiln, to get started in the business. But after a while I could not find any satisfaction in just producing for the market. I felt an urge to try my hand at what the great potters of the Momoyama era made in their day. That would require a Momoyama style kiln - an anagama [cave kiln]. My older sister lived in a place called Kukkuri in Kani city, and she asked around if there was a piece of land somewhere in the mountains where I could build a kiln. Luckily there was a landowner in possession of what I was looking for. “There is a hill on my land you could use,” he said. That was it. I borrowed six thousand yen and bought the land." 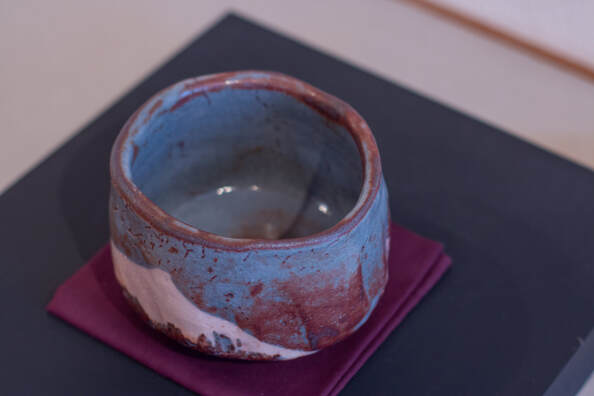 Nezumi shino guinomi (sake cup)
"Luckily there was a man who could give me advice on how to build my kiln which I called Sentarogama. It wasn’t easy. Nothing about this work is easy, and that is why I love it so much! Thinking back about the potters in the Momoyama era you have to admire their accomplishments. In their time there was no electricity, everything was primitive compared to our present day. In spite of that they were able to produce the most exquisite pottery! I firmly believe that even today in order to produce something of that class you need to go up in the mountains and find the proper clay. You must make your own glaze the old fashioned way. Nothing you can buy will replace such raw materials. Once you have the materials and your kiln, the path ahead is trying, failing, and trying again. And it will never end." 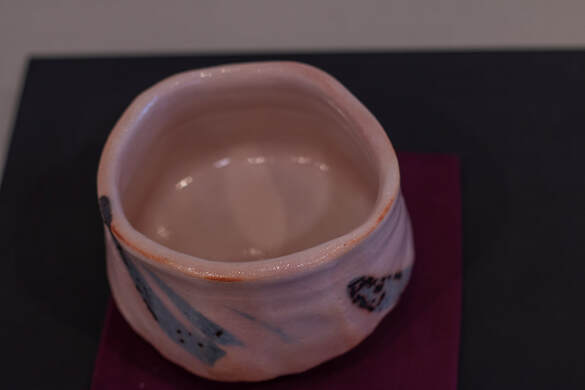 Shino chawan tea bowl
At what point did you feel completely satisfied with a piece?

That point has yet to come. I have never felt I succeed completely! What's worse, those pieces that come out good enough to sell - none of which I would consider perfect - are but a fraction of the whole. Generally about ten percent are salable. You have to spend about 1500 bundles of firewood during the six days of firing. The cost is huge and must be covered by those few decent pieces. This is why I only use the best pine firewood from Fukushima in the last stage of the firing. The first three days I spend to raise the heat to an even level inside the kiln. In this first stage, we stoke every 30 to 40 minutes, and hold the temperature at 950 degrees Celsius for three days. Then we go from 950 to 1250, stoking every five minutes. Only at this stage I use expensive high quality firewood because that is the critical time in the creative process. 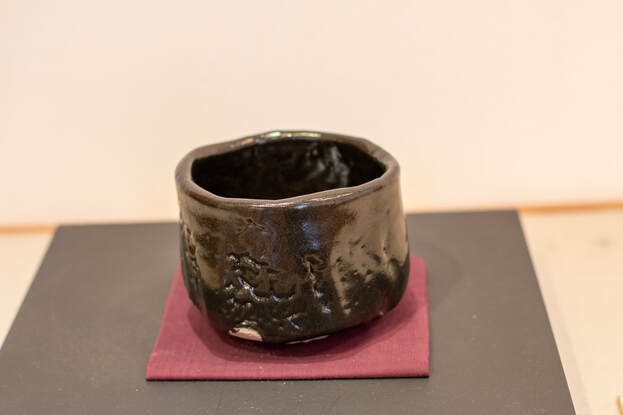 Setoguro chawan tea bowl
How about the placement of the pieces inside the kiln?

"There is no way to know how the fire and ashes will affect the pieces inside, you are completely at the mercy of Mother Nature. When firing Shino you also don’t use any protecting casing for the pieces. You can only put them in there and hope for the best. Moreover, the kiln site outside on the slope of a hill. There is no way of knowing what the weather is going to be like, and the weather has a big impact on the conditions for the firing. Nevertheless I will always begin firing on the day I have decided, come sunshine or rain, it doesn’t matter. So I am at the mercy of the elements. I only fire twice a year, in spring and autumn. Again, conditions differ between the seasons. So as you can see what comes out of the kiln is something Nature will decide, and that is also why I never get tired of this work!" 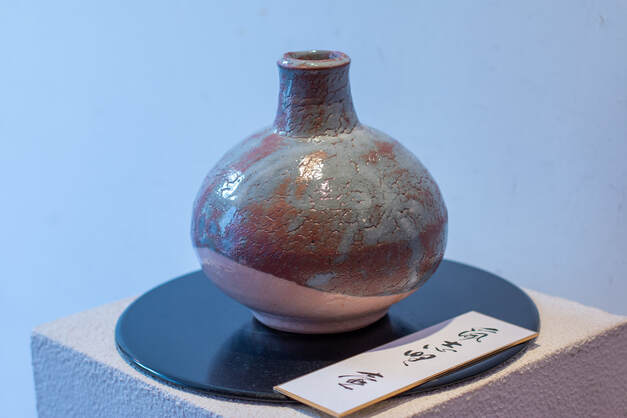 Nezumi shino tsubo (flower vase)
"What is so wonderful about Mino ware is this relation to nature, the uniqueness of every firing and every piece, and of course the inspiration from the old masters. But you should never try to imitate what they did. Conditions then were completely different. They didn’t have access to boundless information, for example, like we do. What we need to do is to try to take our pottery even further in our own unique way, finding our own personal way of expressing ourselves. That is my path. That's also the advice I would give to potters in other countries who would like to create Mino ware. Mino ware is in many ways the very pillars of Japanese pottery. Study the craft and learn, but find your own path. I am not interested in praise in this life, all I want is to devote myself to creating things that will have lasting value for centuries to come, and to do it in my own, personal way." 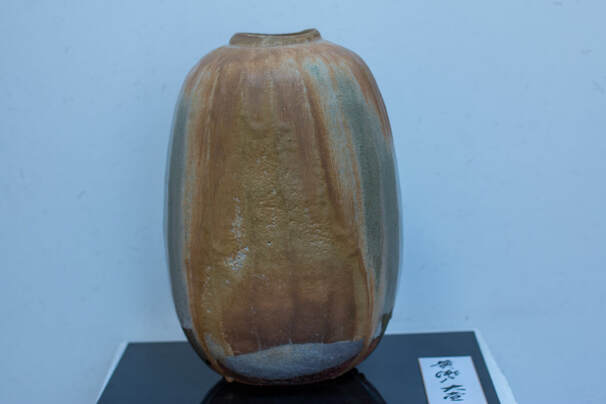 Kiseto ootsubo (large vase)
"The most important thing is to have fun. I find that the firing is the most exciting in the whole process. You can have the best clay in the world and give your pottery the best shape imaginable, but it is during those last climactic days in the fire of the kiln the final result is decided. It was thirty-five years ago that I climbed up that hill and began to build my anagama kiln in the middle of nowhere. I had to route power lines up there so I could have electricity. I must build a dwelling and a workshop, and dug a well. And of course I had to build the kiln itself. I lived like a tramp up there during this time," he says, laughing. "I spent days in the mountains to find the clay I needed. During all this time I have only found three good deposits. But it was what I had to do." 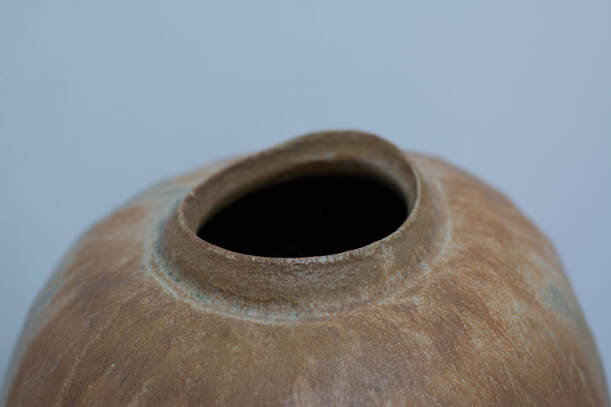 Kiseto ootsubo (large vase)
"One more piece of advice I would give to anyone considering this path in life," he says, "is to learn about the tea ceremony. It is deeply related to Mino ware. Mino ware tea bowls were used by the giants in Japanese history, who loved the tea ceremony. They were influenced by people like Furuta Oribe, the great samurai and tea master, and his master, Sen no Rikyu. Another great influence was wabi-sabi, the Japanese aesthetic ideal. That rustic, organic beauty only comes to fruition after decades or even centuries of use. The tea bowls grow in beauty over time as people use them, and they absorb the tea."

Perhaps, this is what the master is thinking of when he says that he is not interested in praise in his lifetime. For it is only after centuries of usage that his tea bowls will arrive at the final look and feel they were destined for. At that time, their patina will finally meld with the form and colour he gave to them. 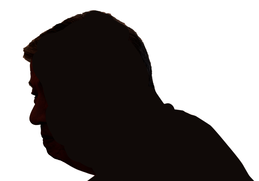