​The day the World Shrank

When we started our journey to inspire tourists to visit Tajimi, virtually very few people were aware of VR or its social benefits. We were lucky to get the go-ahead from Tajimi Tourism Association to start building in this little known medium at that early stage. It wasn't easy to convince people to try VR. And the only way to show how it works is to have people try. Then came the Covid-19 shock. Overnight interest in social VR for travel, conferencing and entertainment skyrocketed.

We started our VR project by shooting photographic 360° still images and guiding people in small groups through them. We would meet in groups of four avatars - including this author - and tour Tajimi city. The response has been very positive. Later we built a fully digital fantasy world to let people experience and play their way through a story about the samurai and their ceramics. Initially, one thousand people a day visited us - it was quite chaotic but fun! Here, people can try samurai-style archery and swordplay, as well as a traditional Japanese tea ceremony, dressed as medieval samurai—all without cost, or the risk of virus infection. Many of the things possible in the virtual world - flying or shape-shifting, for example - are also impossible in real life, still highly accessible to anyone with an Internet connection and a VR headset.

Sales of headsets like the Oculus Quest are growing strongly in the pandemic, and more people can get a taste of virtual worlds. While the technology available to consumers is still in the early days, we can now see that VR is going to be a great alternative to real-world travel and commuting from now on. People now go to movies, art galleries, conferences, and game experiences from their home. VR makes it possible to be together while staying apart.

For Tajimi, this is a great opportunity. Without a strong brand as a travel destination, the city had the same problem as VR has had. You have to try to appreciate it. While virtual travel is not the same as travel in the real world, it allows you to do just this - to try before you fly. And when you are ready to fly, we will be waiting for you. We may even be friends already because the most significant benefit of VR is that it fosters human relations.

We are continuing our journey, employing more VR technologies. This year we have started filming in VR, and the result will be able on YouTube, viewable on ordinary PCs and phones. New material is going to be presented, highlighting a Japanese comic (manga) set in Tajimi.

​We look forward to seeing you, wether it be in a virtual world or in reality. Welcome!
Sign up for a tour
Two days ago I took Velen in Taichung, Taiwan for a ride to my home town in Japan, Tajimi. While our physical bodies were located thousands of kilometres apart, we shared the illusion of sitting in digital chairs facing each other, transformed into avatars. We travelled from place to place with the touch of a button, landing in each scene in mid-air, without the need for seat belts. 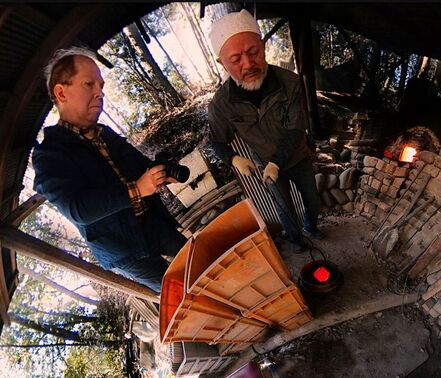 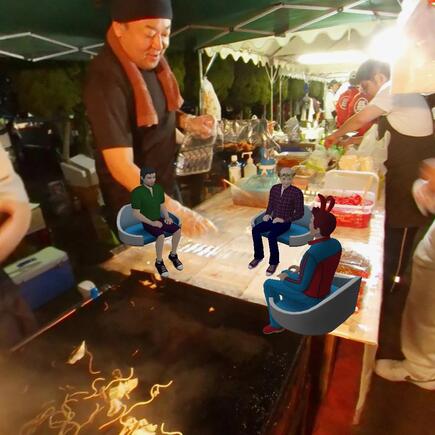 The author and two fellow virtual travellers. Our avatars are immersed in the 360 image from a summer festival in Tajimi.
Sign up for a tour
​Before the existence of this technology, it is highly unlikely that Velen would have visited Tajimi. The probability for our meeting in the real world was virtually zero. Now it is a memory ingrained in our consciousnesses as if it had happened for real. I feel I have made a new friend. I hope Velen does too.

During our trip, I took several shots with a virtual selfie-camera. I posted one of them on Facebook with a short comment on our journey. Velen asked me if he could share the photo. Not only did he do so, but he wrote a long article in Chinese about the tour. What follows is a summary of his text, translated into English:

​“10 o’clock this morning, at 11:00 am local time in Japan, I joined a VR tour promoted by Tajimi, a Japanese city. Because of next year’s 2020 Tokyo Olympics, the Japanese government has increased the budget for inbound tourism promotion. I hope that travellers can also visit small towns like Tajimi. Today’s VR tour guide was Hans, a Swede. Hans has lived in Japan for thirty years and married a Japanese woman. He used the Oculus Go all-in-one VR headset and the free software vTime to take me to his town in the Japanese countryside, a city with 100,000 residents.

So, can you find my avatar in this picture from the tour? I wore virtual glasses today. 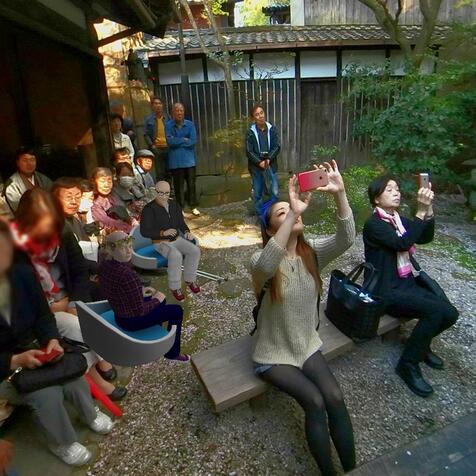 The author and Velen sneaking in on a musical event at the Kobe-gama kiln in Tajimi.

​Tajimi City is located in Gifu Prefecture, a 30 minutes train ride from Nagoya. It is famous for its ceramic products. It is located in a region originally called Mino, the origin of Mino ware. The local area seems to be a place with an abundance of regional characteristics and customs. It is full of depth. If you are an adventurer looking for a small place to explore and if you will travel near Nagoya, you may want to contact Hans. He will help you find places beyond the beaten path, like the local small izakaya style tavern we visited.

​So how was my actual tour? Putting on a dedicated all-in-one VR headset is like a supernatural experience. I put on the headset, started vTime, and accepted an invitation from Hans. I then found myself in a virtual room. There was no need to fiddle with a microphone or earphones, it just worked. Together we immersed ourselves in photos he had taken with a 360-degree camera. He shared a unique feeling of being in Tajimi with me. While experiencing these immersive sceneries, I was having a conversation in VR with a Swede thousands of miles away in Japan!

We chatted about VR table tennis and agreed we should start playing together. At that moment, I felt that there is no physical distance in this world. The potential of VR is unlimited. The disadvantage is, of course, that not everyone has a headset yet. Yes, you can use a mobile phone to join Hans’s tours, but a phone is not very suitable for this. Today, some members on phones were unable to participate because of technical problems. But when everything is going well as it did for the two of us, we can talk like we were actually in the same space, and it’s so much fun.”

Since I first met Velen I have built a fully digitial world of samurai and tea masters, where we have met several times for a virtual cup of tea.
​The video is from one of our meetups in 2019.
​Seeing this long comment on FaceBook made me extremely happy. Our articles and videos have had many positive reactions before, but VR takes it to another dimension. But the tech is merely the enabling element in social VR. The critical thing is meaningful interaction between real people, and it’s only possible if it happens on a small scale. On giant social networks like FaceBook, you can connect to thousands or even tens of thousands of people, give them “likes” for their photos, or even “hearts”, but there cannot be any depth in those relations beyond that. How many real friendships can you actually maintain? Is it possible to build bonds from a meaningful, ongoing conversation even with as few as ten people? In real life, having a conversation with five people at the same time is hard, with more than ten almost impossible. The same problem of diminishing quality with an increasing number of members hampers conversations in the virtual world.

Social VR is a simulation of the real world and works precisely the same in this sense. Ten thousand people milling around in a virtual hall can’t benefit socially from the scale at all. My conversation with Velen, however, felt truly meaningful. In a quiet communication between two or three people, maybe four, there is room for everyone to participate and contribute. Velen and I discovered that we both like table tennis, and table tennis in VR is excellent! I play an AI robot regularly, but next time I look forward to playing Velen. “At that moment [of the conversation],” as Velen puts it, “I felt that there is no physical distance in this world. The potential for VR is unlimited.” I had the exact same feeling.
Sign up for a tour
​VR will only get faster, better, cheaper and easier to use. It will become smaller and lighter until it completely disappears, enabling us to go anywhere, be anyone, and experience anything effortlessly, without leaving our house. We will be able to work from anywhere, connecting to people around the world as if they were in the same room. All this is fantastic, but in the end, it is only real, like-minded people who can connect, collaborate and play together in a meaningful way. That is how we want to build the VR experiences of Tajimi. It’s a place you can explore and enjoy at a small scale, far from the tourist traps. When you are aware of the qualities of the place and its people, maybe you will step out of your virtual world and buy a ticket to enjoy the real thing, feel its smells, taste its foods and drinks, connect to those who live there.

In the end, our VR tours of Tajimi is a door that opens to new worlds in endless succession. Velen and his table tennis is a great example. There was also an American software developer who took the tour and then introduced me to a beautiful healing software - a soothing VR world I sometimes visit now and again to regain energy. And there were others again who taught me many things. There are many more to come. We are only getting started. As for my own inspiration, I now feel a strong urge to visit the southern parts of Taiwan and explore the excellent local cuisine that Velen told me about during our trip.

This is how our world shrinks, thanks to VR. In a weird and wonderful way, the realisation that however far apart you may be, you can meet again in the next moment is an eye-opener. VR is a world of doors to wonderful new experiences. I wonder what will await Velen and me beyond our first virtual table tennis battle? More doors, no doubt. More doors.

How do you participate in our VR tours? Learn more here.

The cheapest and simplest way to experience our tours is to get an Oculus Go VR headset. Several other headsets are supported by the developers of the free software we use for our tours - vTime. Learn more on the developer's site.

UPDATE: Since we published this article, VR hardwardware and software has developed and breakneck pace. We would now strongly recommend to use a VR headset that supports full movement of your body in the virtual world, such as the Oculus Quest. VR has gained tremendous attention lately due to the outbreak of the Corona virus pandemic. Work, education, museum exhibitions and many other activities are now beginning to be transitioned to VR.